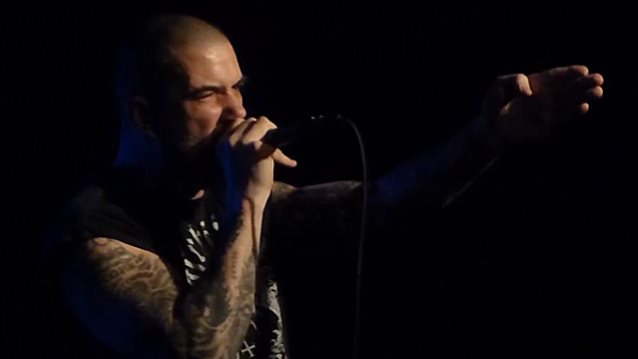 PHILIP H. ANSELMO & THE ILLEGALS To Release 'Choosing Mental Illness As A Virtue' Album In December

PHILIP H. ANSELMO & THE ILLEGALS, the project led by the former PANTERA and current DOWN/SUPERJOINT frontman, has set "Choosing Mental Illness As A Virtue" as the title of its second album, due in December via Anselmo's Housecore Records.

"Choosing Mental Illness As A Virtue" is the follow-up to PHILIP H. ANSELMO & THE ILLEGALS' debut, "Walk Through Exits Only", which came out in 2013 to mostly positive reviews.

In a 2014 interview Yahoo! Music, Anselmo said that the second ILLEGALS album would be "very different" from the debut. "I feel like every solo effort should be different," he explained. "That's a rule in my house under this particular roof. I don't want to regurgitate a damn thing I've done in the past.

"Maybe I might touch on certain things, and in a lot of ways, there's no getting around the voice because my voice is my voice," he continued. "But you can express different musical influences from generations of music. I can do anything I want with THE ILLEGALS. It's my band."

"Walk Through Exits Only" sold around 8,700 copies in the United States in its first week of release to debut at position No. 35 on The Billboard 200 chart. The CD was produced by Anselmo and Michael Thompson, and recorded over a couple of years at Philip's New Orleans studio, Nodferatu's Lair.

Back in October 2015, PHILIP H. ANSELMO & THE ILLEGALS parted ways with guitarist Marzi Montazeri and replaced him with Mike DeLeon. Anselmo told Metal Underground about the split with Montazeri: "What I wanted to do with Marzi was jumpstart his career, which I did. He's the type of guy that needs to be the focal point of pretty much anything he does. So he's got that now and I'm happy for him. More power to him."