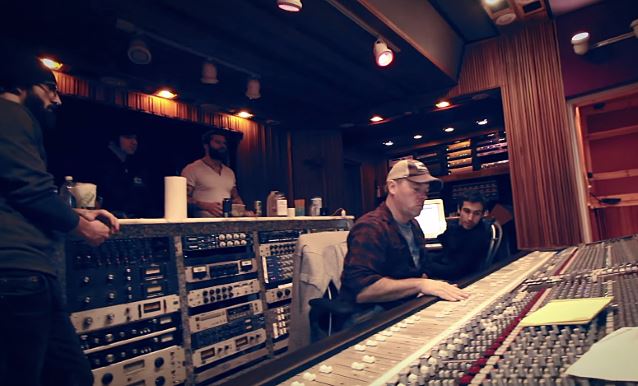 Michigan-based act POP EVIL has released the second in a series of eight episodes featuring footage from the making of the band's new studio album, due this summer. Helmed by the band's longtime director and collaborator Scott Corl, the series aims to give the fans an inside look at the creation of POP EVIL's new CD, which was recently recorded at Studio Litho and London Bridge Studios with veteran producer Adam Kasper.

"We are excited to show our fans an inside look at what it was like for us to live and record in Seattle," says POP EVIL frontman Leigh Kakaty. "[The new CD] took us out of our comfort zone, resulting in what we feel like is our best work yet."

Kasper, who has helmed mega-hit records for bands like PEARL JAM, SOUNDGARDEN and FOO FIGHTERS, was the obvious choice to produce POP EVIL's new CD.

"It was very important to us to choose a producer that has the credentials," says Kakaty. "We also had a distinct vision on where the band could move forward and take our sound into the future.

"With the success of our last record, we wanted to challenge ourselves and explore new and creative ways of musical expression."

Adds Kasper: "Individually, these guys are all great players and writers. Collectively, they are a force to be reckoned with.

"Musically, this record is intricate, heavy and melodic.

"With their charismatic lead singer and a drummer that sounds like John Bohnam and Dave Grohl's love child, I'm more than excited about this one."

The yet-to-be-titled effort will be the highly anticipated follow-up to POP EVIL's previous LP, "Onyx", which was released in 2013 and has sold 115,000 copies in the U.S. alone. "Onyx" also produced four Top 10 singles on the Active Rock chart, with three of them reaching Number One: "Trenches", "Deal With The Devil" and "Torn To Pieces".

Since "Onyx" was released, POP EVIL has played over 250 shows. Rockstar Energy Drink Uproar Festival alongside GODSMACK, supporting STONE SOUR in the U.S. and FIVE FINGER DEATH PUNCH in Europe were just some of the highlights from last year. The band also made headlines with their memorable Rock On The Range festival performance in Columbus, Ohio. Not only did they perform "Trenches" with Rock And Roll Hall Of Fame member Darryl "D.M.C." McDaniels, but the band brought 13 marines on stage showcasing the Lima Company Eyes of Freedom Memorial to stand behind them during the performance.

By the time 2014 came to a close, the band found their songs atop the year end charts at Billboard magazine. "Torn To Pieces" landed at #7 on the "Top Mainstream Rock Songs" while POP EVIL came in at #4 on the "Mainstream Rock Artists" chart.