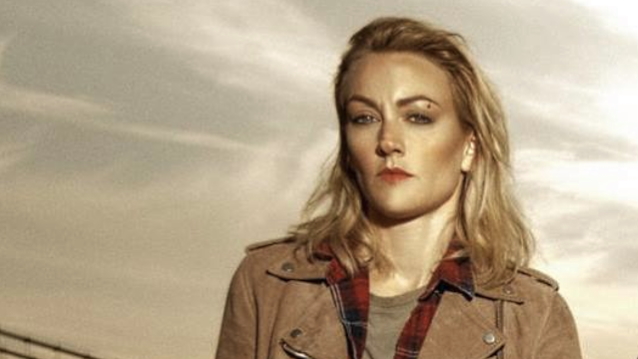 POP EVIL's HAYLEY CRAMER: 'If I Didn't Have My Drumming Ability... I May Have Made The Transition To A Man'

POP EVIL drummer Hayley Cramer recently appeared on the podcast "Side Jams With Bryan Reesman" to talk about her passion for women's rights and LGBTQ rights. The British-born musician wants to be a positive role model for women, although a big part of her feels she should have been born a man. It's a candid and enlightening conversation concerning sexuality, prejudice, and self-education.

Hayley discussing her gender orientation and being a role model for women: "I'm predominantly known as a female. I present myself as a female. But there's a huge part of me that feels I should have been born a man. And now we're touching on the subject of me being in a band with a bunch of men, and me being the gay female. And it works. It works because if I close my eyes, I'm neither male or female. So if I'm in a band with a bunch of men, I'm the same as them. If I'm in a band with a bunch of females, I'm the same as them. I'm predominantly more towards the masculine side, but the way I present myself is more towards the feminine side. And maybe that was a choice I made for my career. I'll hold my hand up to that. If I didn't have my drumming ability, and I was doing a different job, I may have made the transition to a man. But I felt like the cause for fighting for female rights... I didn't want females to be seen as this novelty thing. I wanted to get really good at drums and prove the fricking world wrong. I kept long hair, I didn't get loads of tattoos. I didn't shave my head. I kept quite feminine to prove a fricking point, and that was really uncomfortable for me for a long time. To buy makeup for me was a real struggle. If I walk into a shop to buy makeup, I still feel uncomfortable if I'm standing in a makeup section. I felt that...and then female underwear or female time of the month products. I still struggle every time. Every time I have to walk into a shop and be in that section, it just doesn't feel right. So there's that side of me that's very, very masculine. But my career looks very feminine. But it was a definite choice I made, and maybe that's a sign of the times. I hope down the line that girls don't necessarily have to make that choice."

On being supportive of gay fans: "I would say as a gay musician, touring around America really highlights the work I still need to do. I love every state. One of the things I love about my job is hanging out with people. Where are you at? What's your life about? Like, Tell me your story. But sometimes, I am a little shocked that… I teach kids in America. I have online tuition right now. I'm teaching kids that are going through worrying about if they're gay, and they're in a state that is just not supportive. Having been there, I know it's not supportive, and I know the struggle that they're going through. And I wish I could just beam them to my little town in London for a minute to experience...like, it is okay. There are places in the world where you can be you. Your town just hasn't caught up yet."

On being supportive of her gay students: "I've always taught drums alongside what I do, so I like to play a part in helping out the youth. Because when I think back to when I was that age, I didn't really have anyone to call upon with the struggles I was going through. My mum and dad are fantastic. Thank God, they're fantastic. But they didn't necessarily know about this kind of stuff. And when I see drummers come through my teaching, I can't help but just slightly be there. And just to say, ‘Hey, I see you.' I would never influence them because I'm very aware of the power of being a musician in a rock band that is held on a pedestal. So I never influence these kids, but I also let them know that it's a safe space. You're all right. You can be you. It's a tough one, though. The fact that we're still here talking about this stuff is kind of frustrating."

On fostering a better dialogue with people who are on opposite sides of different issues: "It's really hard, but you know what? If more people understood accountability, and actually being able to hold your hands up when you're wrong...but also try to be more open minded to maybe not go wrong. Just think of other people's feelings, and if you do offend someone, don't go on the defensive. Like, just hold your hand up and say, ‘My bad, I got it wrong.' Because ultimately, that's all we need. I don't need somebody to completely understand me all the time. But if they do say something that has touched a nerve with me, if they could just look me in the eye and go, ‘I didn't realize that was wrong, my bad.' Accountability. If we can teach the next generation to be like that – it's okay to say something wrong if you don't understand what you were getting into. But just to be able to own it..."

Cramer was forced to miss the first couple of weeks of POP EVIL's U.S. tour because of COVID-19 travel restrictions. She has since flown to the U.S. and joined her bandmates on the road.

POP EVIL's "Versatile" tour kicked off on July 14 with an outdoor show in Lake County, Illinois and will run across the U.S. until September 23 including stops at several of the major rock festivals — Rocklahoma, Aftershock and Inkcarceration — as well as supporting SHINEDOWN. Support on the trek comes from special guests ZERO 9:36, BRKN LOVE and LIKE MACHINES (on select dates).