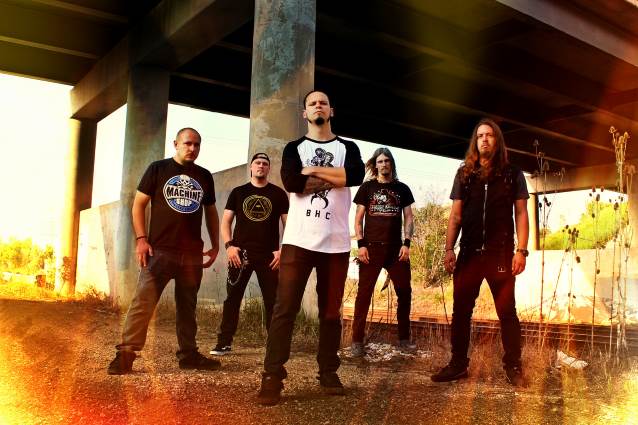 Two years after the release of the band's crushing debut album, "Buried In Violence" on Napalm Records, Wisconsin's PRODUCT OF HATE is back with the first taste of the next phase! "Rapture" is the first single from the group's as-yet-untitled sophomore album, for which they once again joined engineer Scott Creekmore (BROKEN HOPE, REPENTANCE) for recording at Mercenary Digital Studios. Chris Collier (PRONG, KXM, FLOTSAM AND JETSAM) of CMC21 Productions is handling the mixing and mastering this time around. "Rapture" is available for streaming and download now on Spotify, YouTube, Apple Music, iTunes, Amazon, Google Play and all major digital platforms.

"It's been a long time coming, but the era of new music from PRODUCT OF HATE has finally arrived," comments frontman Adam Gilley. "We're excited to share 'Rapture' with the world — it's mean, it's heavy, and it's the perfect song to get you through a long, agonizing day of work."

"After touring in support of 'Buried In Violence' for the two years, we couldn't be more thrilled to start releasing our new, aggressive material," adds lead guitarist Geno Rathbone. "The new record is completely tracked and takes everything we did on the first album and cranks it up a few notches. 'Rapture' is only the beginning, as we plan to follow it up by releasing a little surprise within the next month or so as a way to thank the amazing fans who've shown such undying support to us between these two albums!"

Fourteen songs have been recorded for the new album, with a track listing and title to be announced in the near future as the final release plan and partnerships are revealed.