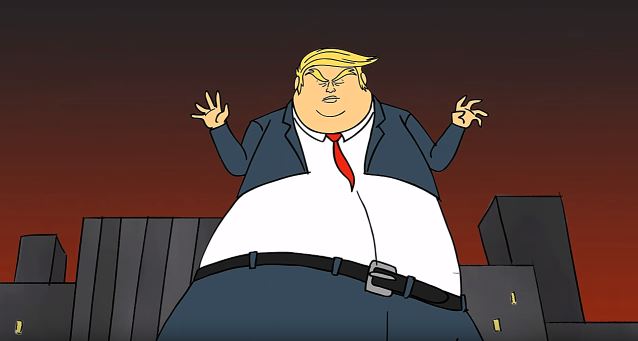 PUSCIFER Takes On 'Trumpzilla' In 'The Arsonist' Video

PUSCIFER, the Arizona-based electro-rock band fronted by TOOL's Maynard James Keenan, has released the video for the song "The Arsonist". The animated clip finds Keenan and his bandmates joined by a special group of female fighters as they take on Trumpzilla.

When asked about the clip, Keenan offered: "Sometimes you grab the Puscifer. Sometimes the Puscifer grabs you."

"The Arsonist" is taken from PUSCIFER's latest album, "Money $hot", which was released in October 2015 via Keenan's Puscifer Entertainment. The album landed at #1 on Billboard's Independent Music chart, #2 on the Alternative Albums chart and #30 on the Top 200. In a four-star review, Revolver magazine described the album as "a meditative and hypnotic — not to mention wholly engaging — offering" and both Crave and Kerrang! placed the release on their year-end, best-of lists, with Crave saying: "The yin and yang of masculine and feminine energy interweave a pulsing eroticism that curls itself around the mind like one of Keenan's many grapevines."

Speaking to The Aquarian Weekly, Keenan stated about the songwriting process on "Money $hot": "I have been working with Matt [Mitchell] for a while now. As far as the larger project, it has been a lot of back-and-forth with him. In terms of the harmonies, there has been a lot of tracking with my own voice. But it has also been a very important step to bring Carina [Round] in and help out as much as she can. You can have peaks and valleys in your voice, so her own peaks and valleys and wave form add a contrast to my own, and create a much thicker vocal, which has been a very important component to add."