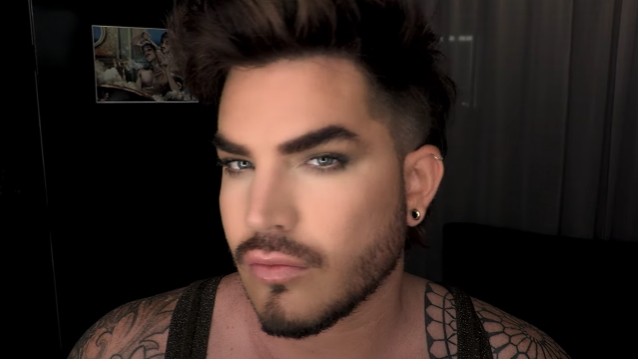 QUEEN singer and former "American Idol" runner-up Adam Lambert has launched a series of makeup tutorials via his YouTube channel. In a message accompanying the release of the initial video, Adam wrote: "Sooo excited to share with you the first of a series of make up tutorials I've been working on! Starting with a natural look I use often when leaving the house.

"Would love to hear your feedback so be sure to take photos of yourself and tag me! Keep an eye out on my socials for future tutorials."

Earlier this year, Lambert, who was the openly first gay man to have a No. 1 album on the Billboard 200 chart, told "The Kelly Clarkson Show" that he's been using makeup for much of his life, and that he could see himself starting his own beauty company. "I would love to; I think that would be really fun," he said. "I was in theater, so [makeup] was a part of getting ready for the show. I just loved getting to sit in front of the mirror and transform my face and cover up all of my freckles at the time."

Lambert, Roger Taylor and Brian May first performed together during "American Idol" in May 2009 for a rendition of "We Are The Champions". They teamed up again in 2011 at the MTV European Music Awards in Belfast, Ireland for an electrifying eight-minute finale of "The Show Must Go On", "We Will Rock You" and "We Are The Champions" and in the summer of 2012, the singer performed a series of shows with QUEEN across Europe as well as dates in Russia, Ukraine and Poland. They have since completed a number of tours and performed at some of the biggest festivals in the world.

May previously described Lambert as the only singer the band had found capable of filling the shoes of QUEEN's original frontman Freddie Mercury, who died in 1991 of complications from to AIDS. "Adam is the first person we've encountered who can do all the QUEEN catalog without blinking," said May. "He is a gift from God." Taylor echoed the guitarist's sentiments, adding: "[Adam's] incredibly musical, and we certainly take anything he says quite seriously."