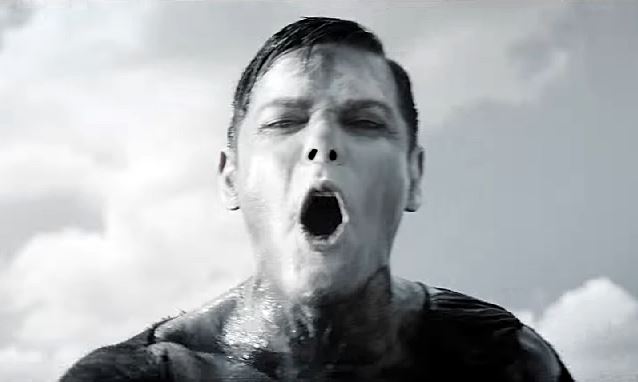 "Eat You Alive", the new video from EMIGRATE, the side project of RAMMSTEIN guitarist Richard Z. Kruspe, can be seen below. The clip was filmed in Berlin, Germany by director Zoran Bihac, the man behind RAMMSTEIN's legendary "Mein Teil" video.

The "Eat You Alive" single sees Kruspe emerging from the deep in truly striking style, flanked by some of the musicians who appear on the forthcoming "Silent So Long" album, with Joe Letz from COMBICHRIST taking over on drums (Letz also appears in the clip for "My World", a track from the debut EMIGRATE album, released in 2007; APOCALYPTICA's Mikko Siren handles drum parts on the new album).

Alongside Kruspe and Letz, the video also features Margaux Bossieux on bass and Arnaud Giroux on guitar, with vocalist Frank Delle — from chart-topping German collective SEEED — reprising his role on the album with evangelical zeal; Bossieux was previously with New York punk band DIRTY MARY, while Frenchman Arnaud plays bass on the new album, as well as lending his production skills — in fact, his work on both EMIGRATE albums has been central to the cause.

For Kruspe, tapping into such varied musical personnel is very much in keeping with the "open door" ethos of the project; as well as allowing the guitarist to keep his creative instincts finely honed, EMIGRATE was conceived as a vehicle for other musicians to have their say and leave their mark, harking back to the early, ever-shifting punk scene in East Berlin where he originally cut his teeth.

The result of re-kindling this spirit is a new 11-track album, "Silent So Long", that sees a number of special guests adding to the overall flavour (Lemmy, Marilyn Manson, Peaches, etc.),plus a new single/video, "Eat You Alive", that shows the kind of chemistry that might be conjured up were the musicians to decide to take to the road.

In the meantime, "Eat You Alive" is available as an "instant grat" when "Silent So Long" is pre-ordered on iTunes.

"Silent So Long" will be released on November 24 via Spinefarm Records.