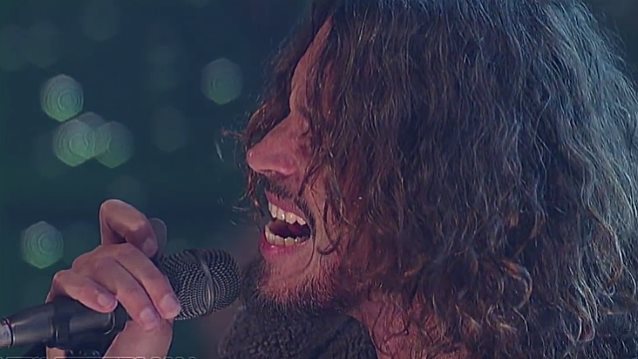 Report: CHRIS CORNELL To Be Laid To Rest On Friday In Los Angeles

According to CNN, SOUNDGARDEN frontman Chris Cornell will be laid to rest on May 26 in Los Angeles. His body will be flown from Michigan to Los Angeles on Sunday, and the singer will be buried at the Hollywood Forever Cemetery.

A source told CNN: "The family is thinking about a [public] memorial for fans, but is coping now with their loss and the funeral service."

SOUNDGARDEN had been working on material for its seventh studio album and had tentatively planned to enter the studio later this year.

The band reunited in 2010 after a 13-year hiatus, first touring and then writing and recording "King Animal", its first new studio album in 16 years.

He formed SOUNDGARDEN in 1984 with guitarist Kim Thayil and bassist Hiro Yamamoto, originally playing drums in addition to singing until drummer Matt Cameron joined the lineup.

SOUNDGARDEN became one of the first and most successful bands to emerge from the Seattle scene, alongside friends and contemporaries NIRVANA, PEARL JAM and ALICE IN CHAINS.

The band first broke through to rock radio with its 1991 third album, "Badmotorfinger", which featured the singles "Outshined", "Rusty Cage" and "Jesus Christ Pose". That paved the way for 1994's five-million-selling "Superunknown", which included "Black Hole Sun", "My Wave", "Spoonman" and "Fell On Black Days".

SOUNDGARDEN split up in 1997 due to tensions within the band, with Cornell first starting a solo career than teaming in 2001 with the instrumental members of RAGE AGAINST THE MACHINE to launch AUDIOSLAVE. That band recorded three studio albums before splitting in 2007.

Cornell also collaborated in 1990 with members of what would become PEARL JAM to form TEMPLE OF THE DOG, making a self-titled album in 1991 in tribute to late MOTHER LOVE BONE frontman Andrew Wood. TEMPLE OF THE DOG reunited last year for a short five-date tour, its first ever.

Cornell also contributed solo songs to a number of films, including "Great Expectations", "Machine Gun Preacher", "12 Years A Slave" and the recent "The Promise". He also sang the theme song, "You Know My Name", to the 2008 James Bond adventure "Casino Royale".

Cornell and his wife also started the Chris And Vicky Cornell Foundation to support children facing challenges, including homelessness, poverty, abuse and neglect.

He is survived by Vicky and three children, a daughter named Toni, a son named Christopher and a daughter named Lillian from his previous marriage to former SOUNDGARDEN manager Susan Silver.