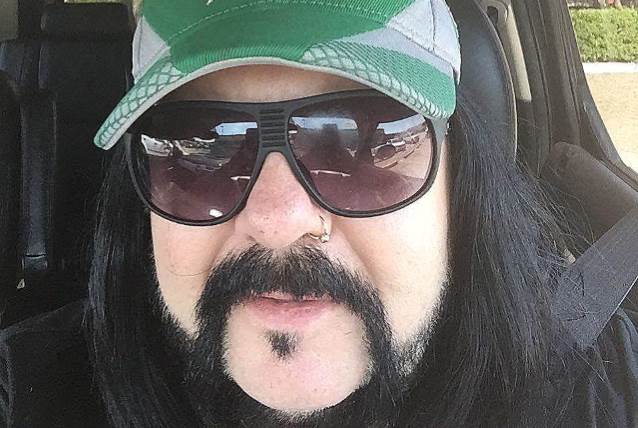 According to the Las Vegas Review-Journal, sources who knew Vinnie Paul Abbott said the former PANTERA drummer had suffered "a major heart attack" when he died in his sleep on Friday, June 22 at his home in Las Vegas. He was 54 years old.

Vinnie Paul's body has been turned over to the medical examiner to determine an official cause of death, TMZ reported. After that, he will be flown back to his home state of Texas to be buried between his mother and brother.

"This is such a shock because he was so excited about finishing up the [new HELLYEAH] album and getting back on the road," singer Franky Perez (APOCALYPTICA, VELVET REVOLVER),a longtime friend of Vinnie Paul's, told the Las Vegas Review-Journal. "I'm still trying to piece this together."

In a 2014 interview with "The Jasta Show", Vinnie Paul lamented the fact that the "fun side of rock and roll" seemed to be missing from many of the tours, with most musicians preferring to relax on their buses and catch up with their loved ones instead of partaking in the kind of debauchery that was embraced in the '80s and most of the '90s.

"The bands that are out here these days are not like what they used to be, and it really does affect you being able to get tours and stuff," Vinnie said. "I mean, you cannot go around being the GUNS N' ROSES kind of party band that used to be out there."

Vinnie, whose band HELLYEAH had just completed a U.S. tour as the support act for FIVE FINGER DEATH PUNCH at the time of the interview, continued: "I mean, I still drink every night and I love it, but it wouldn't be good for me to go stumbling into FIVE FINGER's dressing room skunk drunk and blowing shots up for everybody, because it's gonna possibly affect their performance. People have a lot on the line with these tours these days, and they really don't want that fun side of rock and roll. I mean, it's scary to me, man."

He added: "I remember, in 1999, when we did the last Ozzfest that we were part of, and I think DISTURBED was on it, STATIC-X, obviously Ozzy, us, and we were the only band on the tour that had a rider that had any alcohol. Nobody else had it. And I'm, like, what is going on? I mean, this is '99. And I'm trippin', and I'm, like, 'Man, this ain't what it used to be.' These guys finish their set, they go out to their bus and play Nintendo or call their girlfriends. What happened to rock and roll, man? I'm out going to titty bars every night, I'm out going to rock bars, I'll sit in and jam with bands, I'm drinking my ass off. Once I'm done, I'm done. I'm ready to have a good time.

"The most important thing about drinking on the road is just you've gotta do it in moderation, first of all," he said. "You've gotta know your limits. Don't wake up with a bottle of vodka in your hand. You wake up every day and rehydrate yourself and get ready for that concert, That's the most important thing. You cannot give people your hundred percent when you're wasted up there; it just doesn't work, man."

After host Jamey Jasta told Vinnie that the drummer possessed a "superhuman"-like alcohol tolerance, Vinnie said: "Knock on wood, I haven't had any liver problems or anything yet. But I drink a lot of water; I drink vodka and water. And I drink Pedialyte and I drink pickle juice and I do all these things that rehydrate me from the alcohol. Vodka is much easier on your system than dark whisky and stuff. So I think that enables me to be able to be 'superhuman,' but I think if other people did the same kind of regimen, it wouldn't be so hard on them. But I see people all the time that don't drink and they'll go out and just blow their head off and it wipes them out for two or three days."

More than a decade after witnessing the murder of his brother, "Dimebag" Darrell Abbott, while they were both playing at a club in Ohio, Vinnie Paul told the "Talk Is Jericho" podcast that he still felt " like a 19-year-old kid. Everything I do, I approach the same way," he said. "I'm not married. I don't have any kids. I've been married to music my entire life. I've been dedicated to it. I know what it takes to do it. And ever since my brother has been taken from me, I feel like I have to live for both of us. And I bring it everywhere I go, everything I do, and I think he's here with us, watching us and enjoying everything that's going on, man."

Vinnie Paul and his brother formed PANTERA in the 1980s. Their father was Jerry Abbott, a successful country songwriter whose tunes were recorded by the likes of Emmylou Harris and Freddy Fender.