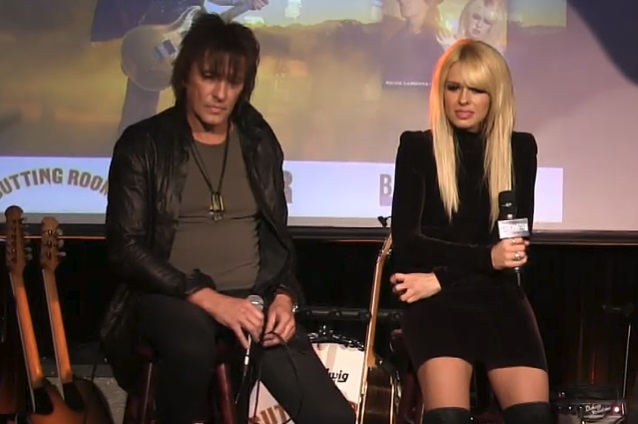 The pair has joined forces for a new, genre-spanning musical project under the name RSO that sees these two platinum-selling singer-songwriters and world-class guitarists teaming up as a duo. They recently released a five-track EP called "Rise", with more music on the way.

The evening featured a long-form interview, short performance, and opportunity for audience questions. The event was part of the BackStory Events online series and was live streamed by Guitar World magazine.

You can now watch it below.

The two first met in Hawaii in 2013. Sambora was vacationing there and was asked by his old friend Alice Cooper to join him onstage at a charity show. Orianthi had been Cooper's guitarist since 2011. "Alice and I are sitting in the audience while the band is rehearsing and I said, 'Who's that?' And he said, 'That's Ori. She's played with Michael Jackson.'"

"We just hit it off straight away," Orianthi recalls. "We started jamming out and it was really great. Afterward Richie invited me to come hang out and we started writing and the chemistry was just there."

"From the first time we were onstage, it was so powerful," Sambora says. "It felt inevitable that something was going to happen. I, personally, knew in my heart, after that first time we played together that it wasn't going to be the end."

Two months later, Sambora invited Orianthi to join him on a festival tour of her native Australia and later Europe. The two traveled together, performing and feverishly writing songs. "There was an airstrike in France and we had to drive eight hours in a van," Sambora recalls. "We got out the guitars and wrote three songs in the van. Ours is a true Bonnie and Clyde rock and roll kind of story."

Sambora and Orianthi eventually became a couple and now share a home in Los Angeles where they have built a recording studio in their kitchen, complete with studio-size speakers, keyboards, computers, and mics. There are amps in the dining room, the living room overflows with racks of guitars, and the home theater has been converted into a drum room. Most of the songs on "Rise" were recorded there over the past two years with songwriter/producer Bob Rock (METALLICA, BON JOVI).