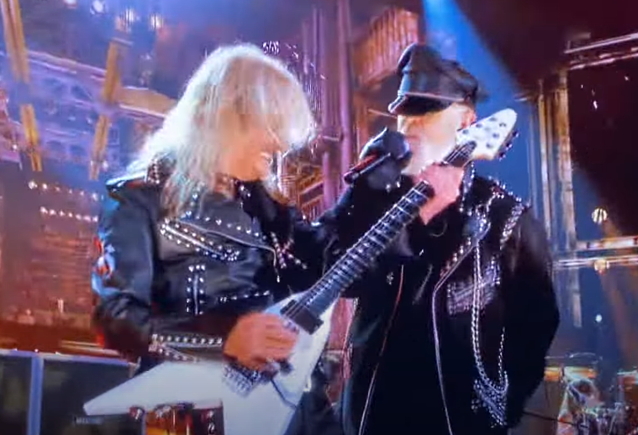 ROB HALFORD On Performing With K.K. DOWNING At ROCK AND ROLL HALL OF FAME: 'It Just Felt Like He Was Always There'

In a new interview with the San Antonio Current, JUDAS PRIEST singer Rob Halford was asked if performing with original PRIEST guitarist K.K. Downing at the Rock And Roll Hall Of Fame ceremony helped put aside some of the acrimony that K.K. has shown about not being in band for these last few tours. Halford responded: "I think we should let the music speak for itself, really, because as you'll see from the performance — I think it's going to be on HBO soon — you'll see that all of that other stuff is irrelevant. All the things that have been said and suggested just float off into the air. What matters is what's going down on that stage at that time you're performing together. And there he is on my right-hand side. It just felt like he was always there. Look behind me and there's ['70s-era PRIEST drummer Les Binks], and the memories just are overwhelming. But, more than that, you're focusing on the moment that you're back together again and playing live. It was really a whirlwind. We were in each other's company for a very, very short space of time. We had very little time to communicate. But for the purpose of the induction of the Rock And Roll Hall Of Fame together, it was absolutely crucial that K.K. and Les were there. They were inducted, they needed to be in the room. And more than that, we were thrilled that they took the opportunity to say, 'Yeah, we'll come and jam on stage again with you guys.'"

In an interview with Lauren "Lern" Elwell of the KSHE radio station, Halford was asked what it was like performing with Downing and Binks at the Rock Hall. He said: "It was good. We hadn't seen [Downing] forever. And I've still yet to watch footage of that. All I remember is my brief interactions with K.K., because I'm always running around the stage like a mad drag queen. My interactions with Ken and with Les, it was great. It felt wonderful to have that moment together after such a long time. And that just shows you the power, the weight, the vibe that the Rock Hall suggests you try to attempt. Try and recapture something of the essence that it really part of why you're here, why you're being inducted. I was just so happy that Ken and Les showed up, because they needed to be there. It was entirely their choice, but I said it makes absolute sense if you're in the room and we're playing together. And we did, and it was magical."

Last month, Hill was asked by the Detroit Metro Times if he thought there was any chance of ever reconciling with Downing and him rejoining PRIEST. Hill responded: "I think time is not on our side for that, you know? Never say never, put it like that. [Downing's] gonna be there at the Rock And Roll Hall Of Fame anyway. He's gonna get up and play some songs with us there. It might kickstart something; I don't know. On the other hand, he might pull us all apart. [Laughs]"

Earlier last month, Downing confirmed to Ultimate Classic Rock that his goal with the Rock Hall performance was "to represent the attitude and hopefully the legend of what JUDAS PRIEST is and has become and what it means to everybody who's been on that very long journey through the decades with the band. And hopefully it will just kind of remind people and bring back some cherished memories of the heavy metal parking lots all around the world."

Downing added that performing with PRIEST again would be like riding the proverbial bicycle, more than a decade after the guitarist last played with the band. "It's what I've done so many times," Downing said. "It's almost like cracking a beer, let alone riding a bike. It's embedded in me. It's what I do. So it'll be quite something to look forward to, just to get up there and crank the amps up and just do it once again, for that short moment in time."