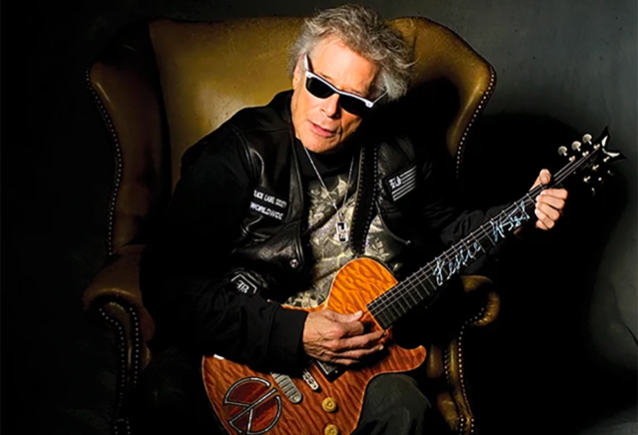 West, born Leslie Weinstein, died earlier today (Wednesday, December 23) at the age of 75. The iconic guitarist, vocalist, songwriter and storyteller has left a legacy that to this day is celebrated by peers and fans across the world.

From 1964 through today, few artists have left a more significant mark on music as we know it. Guitarists across the globe together will unite in sadness as the world says goodbye to a true original.

Sad to hear of Leslie West's passing. Such a lovely bloke. He was fantastic to us when Sabbath supported Mountain on our first US tour. He came to see us at Mohegan Sun, even though he was wheelchair bound. Mississippi Queen one of, if not the, greatest riff of all time. RIP pic.twitter.com/DZ3FLWeGpQ

Leslie West was the very first US guitar player I met when Humble Pie opened for Mountain here. Leslie’s playing and sound had me glued watching everything he did. He was a sweetheart and an extremely funny man. I love you Leslie and will miss you dear friend. RIP @lwestmountain

R.I.P. Leslie West. We had some great times together onstage and some legendary laughs everyday on tour. Thank you for all the great music. My deepest condolences to the West family. @lwestmountainpic.twitter.com/7zDljGMRk1

Wow ... I'm very saddened to hear this terrible news about Leslie West. He was a major influence on my playing. God Bless you Brother.. you are Soaring with Angels 🙏🏽♥️ https://t.co/wEeLbJ6fXZ

One of the GOAT.
This year will not be looked upon with fondness outside of marriages & childbirth.
Rest In Chords Of Power, Fatsby.
🌹

So Sad to hear Leslie West past away. Leslie West was a force to be reckoned with  My condolences to his family he will be gone but not forgotten and his vibrato   was like no other       . More Cow Bell! RIP 🙏❤️🎸 pic.twitter.com/4ekgHsnOAq

Holding the Mississippi Queen!
One of the baddest, true hard-core rock and roll guitar warriors that ever lived! Never In My Life did I find a legend like you. 🎸 Great musicians will never die. Rest in Peace Leslie West. @lwestmountainpic.twitter.com/Fue0VkX8M3

I am very saddened by the loss of one of my biggest guitar heroes Leslie West. His band Mountain was amazing, and his guitar tone was always a huge influence on me. I saw him live many times, and GFR played shows with Leslie on the same bill. Huge Rock Guitar Legend. 2020 sucks. pic.twitter.com/k48oSY4VQT

Sorry to hear this. R.I.P. #LeslieWest#condolenceshttps://t.co/nqmtkhwgq7

So very sad to hear that my dear friend Leslie West as passed away.
A Pioneer, both singing and guitar playing , was absolutely beyond.
Brothers for five decades.
Gab and I love and miss you ..
Millions of music listeners will remember your music my brother.
Mountain
🕊🙏💜 pic.twitter.com/a11JvOCGZW

Sad to hear that one of my big influences in my teenage years Leslie West passed away yesterday.Songs such as’Mississippi Queen’and’For Yasgur’s Farm’ by his band Mountain are some by of the favourites in the soundtrack of my life.
His legacy will live on.
R.I.P. Leslie 🙌🏻🤟🏻 pic.twitter.com/1QtbTlT236

2020 is not letting up....R.I.P. to one of the greatest riff masters ever!!!! Leslie West the guitar and voice of Mississippi Queen, Never In My Life, and Nantucket Sleighride...gone but never forgotten!!!! #2020cansuckitpic.twitter.com/o2bkSwU72x

Just heard that Leslie West has passed away. One of the greatest guitar players, singers, and songwriters in the world; inspiration to many of us!
Now he will be reunited with one of the greatest bass players of all time, Felix Pappalardi.
RIP, Leslie#Mountain#Legend

RIP to the great Leslie West of Mountain. #lesliewest#mountain#guitar#legend#neverinmylifepic.twitter.com/SQ5EuEspKP

Leslie West has moved on to go jam with EVH. As a fellow Queens N. Y. kid Leslie was our guy. From the days playing the Action House in Long Island with the Vagrants, Leslie was the best of the best. Do yourself a favor... take a trip back to 1971..... https://t.co/QRgVzfRHQopic.twitter.com/bWERIjMqny

So sad to hear of the passing of this legendary 'mountain' man Leslie West. I got to meet and hang with him for a few days through Al Pitrelli when Leslie was invited as a guest artist on a TSO tour years ago. RIP sir, you were a helluva guy and monstrous influence too many!! pic.twitter.com/vmiKXjyNU2

RIP Leslie West. One of the greats. What a loss #riplesliewestpic.twitter.com/mSv6ar9kxH

Damn 2020! #LeslieWest the legendary guitarist of the great band #mountain has left us. You were an inspiration to so many fans and guitar players. (I know @MW_Schenker mentioned you as big influence). God speed Mr. West. @lwestmountain#ripLeslieWest

Rest in Power #LeslieWest! I love his playing, singing and writing. A big influence on so many musicians, including myself. Leslie had THE SOUND in his hands. Was so cool to hang out with him at a NAMM dinner in ‘09, what a great friendly guy and phenomenal musician. R.I.P. pic.twitter.com/WsV25hmnB9

RIP LESLIE WEST!! Everything about the man, from his Gtr sound to his Soul was Huge!! Cheers man!! pic.twitter.com/52XNQIKAJP