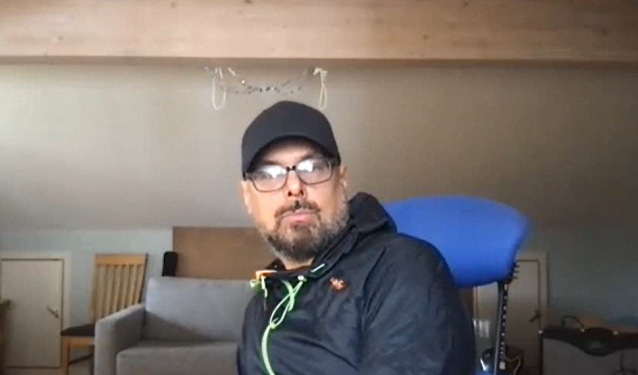 ROY KHAN Has Never Regretted His Decision To Leave KAMELOT: 'It Was The Only Choice I Could Make'

Roy Khan says that he has never regretted his decision to leave KAMELOT.

The 52-year-old Norwegian singer announced his exit from KAMELOT in April 2011 after taking several months off to recover from a "burnout."

In a brand new interview with Metal Command, Roy — whose full name is Roy Sætre Khantatat — said about his split with KAMELOT (as transcribed by BLABBERMOUTH.NET): "Was it hard [to leave]? Yes and no. I mean, it was hard in the sense that KAMELOT at that point was everything I had dreamt of since I was a little kid. There was good money, we had great success, and the band was still going up. But I was not in a good place personally; mentally, I was not in a good place, for many reasons. So it wasn't really that hard to make that decision. And there were things that happened at that time that were so awkward… I don't wanna say too much about that, 'cause it's a long story, but there were things that happened that made that decision very simple to me. Although there were times after that when I was bitter and, like, 'Oh, man. If only…' But it was a very good choice. It was the only choice I could make. I don't think I would have been alive today if I hadn't [left]… There hasn't been one time that I regretted it. I really could not have done things differently. And I know that in my heart, and I always knew that. But there's still room for bitterness [when] you have to make decisions that you have to make."

Two months ago, Roy told Chaoszine that he is "really, really extremely thankful" that KAMELOT was able to continue without him, "'cause I had no intention to hurt the band. It was a very personal decision to quit the band and I simply had to," he said. "And I'm just glad that everything turned out in the end to be… They managed to go on without me, and I'm just very thankful for that, really."

Khan reformed his pre-KAMELOT band CONCEPTION four years ago and released an EP, 2018's "My Dark Symphony", and a full-length album, 2020's "State Of Deception".

In April 2018, Khan released his first-ever solo song called "For All". The track, which was written by Khan, was recorded at Stable Studios in Oslo, Norway in March 2018 and featured Roy on vocals, piano and keyboards alongside Leif Johansen on fretless bass and Geir Olav Akselsen on all guitars.

Khan previously reflected on the circumstances that led to him ending his long working relationship with KAMELOT during an appearance last fall on the "Breaking Absolutes With Peter Orullian" podcast. Roy said: "That whole thing was a cocktail of several things that just happened to climax at that point. As you all, KAMELOT was getting more and more popular, so I was away months every year — like half the year at least I was gone. I was having a family, and that right there was starting to tear me apart. And then I was living my life not very healthy — let's put it that way — and I did a lot of stupid stuff back then that… I knew in my heart that it was going down the drain."