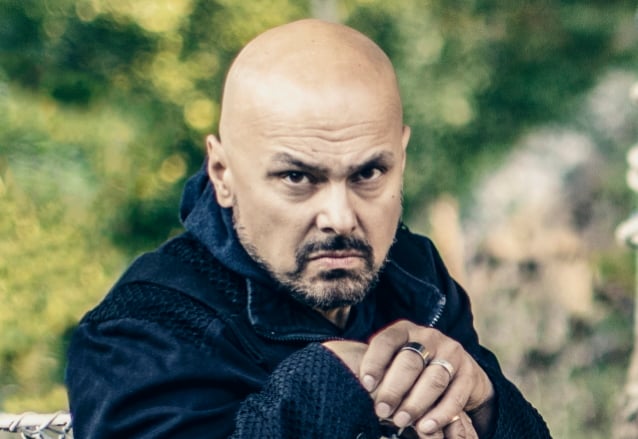 Roy Khan says that he is "extremely thankful" that KAMELOT was able to continue after he left the band.

The 52-year-old Norwegian singer announced his exit from KAMELOT in April 2011 after taking several months off to recover from a "burnout."

In a brand new interview with Chaoszine, Roy — whose full name is Roy Sætre Khantatat — said about his split with KAMELOT (as transcribed by BLABBERMOUTH.NET): "I'm really, really extremely thankful that KAMELOT was able to continue without me, 'cause I had no intention to hurt the band. It was a very personal decision to quit the band and I simply had to. And I'm just glad that everything turned out in the end to be… They managed to go on without me, and I'm just very thankful for that, really."

Khan, who reformed his pre-KAMELOT band CONCEPTION four years ago and released an EP, 2018's "My Dark Symphony", and a full-length album, 2020's "State Of Deception", also confirmed that he is planning to eventually release a solo LP.

"The first thing I'm gonna do is I'm gonna do a streaming-type gig, which is actually pre-recorded," he explained. "And that's gonna be some sort of a kick-off to my solo thing, whatever that's gonna be. I have tons of songs that just need to be recorded. It's all about finding the time and inspiration, the right people and the energy…

"Making an album, a full album, is such a process," he explained. "When you're a band, we divide the work between us, but making a full album yourself, it's a lot of work and it really consumes you for such a long period of time. I mean, when you listen to a record, it's maybe an hour of music, maybe 45 minutes, but making those 45 minutes takes — if you count everything — maybe two or three years. And maybe you spend half a year in the studio, in and out, breaking things down, building them up again and changing things. It's a very energy-consuming and time-consuming process. So I guess I'm a little bit weary of eating myself up and ending up back where I was, where I left KAMELOT. Because part of it was it was just consuming my whole life. I was becoming this character that I was onstage. Even when I was home, I was Roy Khan. I'm not sure my wife and kids were too happy about that."

Asked about a possible release date for his streaming performance, Roy said: "There are people working on it right now, both the video and the audio, for this first thing that's already recorded. But that's gonna be cover songs. And the theme is gonna be 'my first'. So it's gonna be my first KAMELOT song, the first Norwegian song, with Norwegian lyrics, that I ever heard, the first song that I ever sang in a microphone — stuff like that. That's gonna be the kick-off for whatever this solo thing of mine is gonna be. But it should be out anytime. I just need to really get moving."

In April 2018, Khan released his first-ever solo song called "For All". The track, which was written by Khan, was recorded at Stable Studios in Oslo, Norway in March 2018 and featured Roy on vocals, piano and keyboards alongside Leif Johansen on fretless bass and Geir Olav Akselsen on all guitars.

Khan previously reflected on the circumstances that led to him ending his long working relationship with KAMELOT during an appearance last fall on the "Breaking Absolutes With Peter Orullian" podcast. Roy said: "That whole thing was a cocktail of several things that just happened to climax at that point. As you all, KAMELOT was getting more and more popular, so I was away months every year — like half the year at least I was gone. I was having a family, and that right there was starting to tear me apart. And then I was living my life not very healthy — let's put it that way — and I did a lot of stupid stuff back then that… I knew in my heart that it was going down the drain."