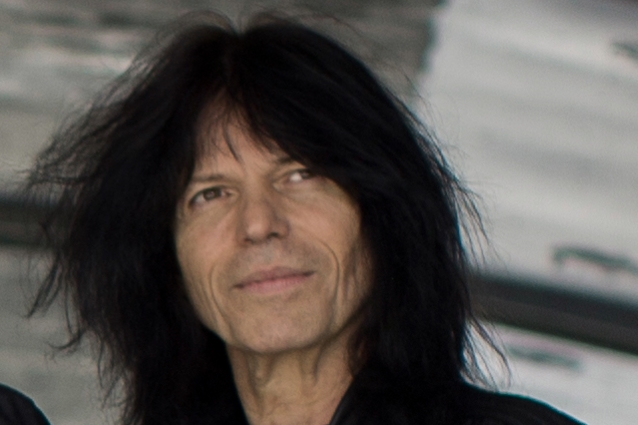 RUDY SARZO Recalls MOTÖRHEAD Opening For OZZY OSBOURNE: 'It Was Like Touring With Pirates'

Said Sarzo: "It's really a roundabout way. The path towards me joining started maybe four years ago. I was touring with the Geoff Tate version of QUEENSRŸCHE, and they bring [sic] in Sass Jordan to perform the part of Mary, because we were performing the whole 'Operation: Mindcrime' record. I had known Sass from years before, but I never really got [to know her well]. Once you're in the same tour bus, you really get to know a person. She's such an incredible talent, and also an incredible person, too. It just so happens that her husband, Derek Sharp, has been the lead singer with THE GUESS WHO for 10-12 years. It came a point that they were looking for a bass player — this happened maybe a year and a half ago — and they called me up. Sass said to Derek, 'Hey, why don't you call Rudy?'"

He continued: "I've been a fan of THE GUESS WHO since I was a kid. When we play on stage, all these songs, they bring up memories of crazy girlfriends that I had in high school. Jim Kale, the founding bassist of the band, he's retired from the road. He passed me the torch. Actually, they were doing a show in Las Vegas. He brings me up on stage and says, 'Rudy Sarzo is going to be taking over my spot from now on.' I did one song, got off the stage and he finished the show.

"Besides playing with QUIET RIOT, this is the [only] other band that I've actually got to play with an original drummer," Rudy added. "That makes such a difference, because you're actually locking into the original feel and rhythm, the intent, [what] the foundation of the song is all about. It's not an interpretation watered down from five generations of different percussionists coming into the group. It's very hard to find all the original components, and this really gives me an opportunity to get the sense of the real deal."

Sarzo also discussed his role in maintaining an artist's legacy. "As a band member, we have responsibilities to keep what we have created alive, whether a member leaves the group or he passes on," he said. "I wish I would have understood that over 35 years ago when Randy Rhoads passed, because I would have not left Ozzy, but I didn't know how to deal with it. It was incredibly painful. Now, any time that I have an opportunity — like, we do these Randy Rhoads tributes, and it gives me an opportunity to not only celebrate his memory, but continue on the responsibility that we that played the music — that we were his friends, his band mates — to carry the torch on behalf of his compositions, his musicianship and his friendship."

Sarzo further elaborated on his years touring with Osbourne and shared his memories of when MOTÖRHEAD opened for Ozzy. "Nothing prepared me for MOTÖRHEAD," he said. "For about a week, I couldn't tell who was the crew and who was the musicians. They all wore the same patches and jean jacket. [Lemmy] was the most well-read individual I've ever met. He would get off the bus to wash up, and he would have a small bag of books — paperbacks sticking out — and a bottle of vodka... It was kind of like hanging out with pirates."

Sarzo — who began playing bass for Osbourne in 1981 (the same year he toured with MOTÖRHEAD) — joined THE GUESS WHO in 2016. His first album with the group, "The Future IS What It Used To Be", was released in September via Cleopatra Records.