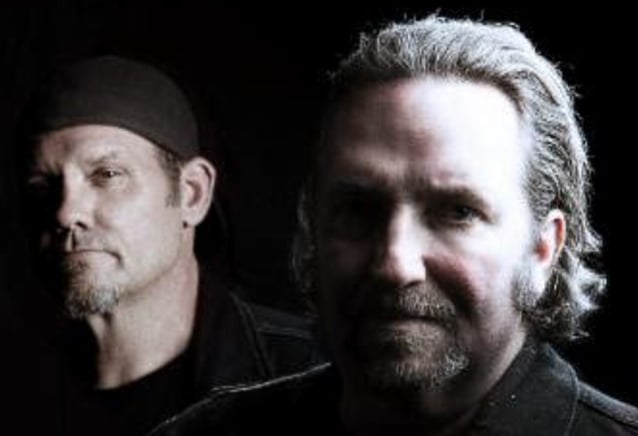 SACRED REICH frontman Phil Rind has once again reflected on the passing of his former bandmate Jason Rainey, saying he and Jason "never really got a chance to resolve" their differences before the guitarist's death.

Rainey died in March 2020 of a heart attack. His death came more than a year after he was fired by SACRED REICH just as the band was beginning to record its comeback album, "Awakening".

Rind discussed Rainey's exit from SACRED REICH and how he dealt with the guitarist's eventual death during a brand new appearance on "The Jasta Show", the video podcast hosted by HATEBREED frontman Jamey Jasta. He said in part (as transcribed by BLABBERMOUTH.NET): "Jason had a lot of issues going on, a lot of health issues, and going up to the last record, it was obvious to everyone that he wasn't gonna be able to do it. But we had to go all the way to the end. I said, 'We have to go all the way, because we don't wanna leave a 'what if'.' Did we not go far enough? Did we not try hard enough? Did we not do everything that we could to try to make it work? So we did. But when it didn't work out, he was really upset — like, really, really, really upset. And I was probably the closest person to him in the whole world. And every year on my birthday, even if he didn't have a nickel, he would find a way to get me something — if it was a little BEATLES picture; whatever it was. So it really hurt him to not be in the band. That was his whole identity; it was the one really positive thing he had in his life. And we would have some very heated discussions about the way things went. And I said, 'Look, I was there from day one. You can tell anybody else whatever story you like to tell folks, but I was there the whole way.' And I wish he wasn't so upset, because I still loved him and I was still his pal and I was still there to help him, whether he was in the band or not in the band. But it was really difficult for him. So that was bad terms — it was bad; it was hurtful. And then he died. So we never really got a chance to resolve any of it. So how do you deal with that?

"With Jason, I knew he had a lot of health issues," Phil continued. "We didn't expect him to have a heart attack and die. But what can we do? We just have to accept things as they are.

"When somebody close to you passes away, you can make up the story, 'Oh, I never got to say goodbye. I never did this. I never did that.' Well, it's too late. This is not helping; there's no benefit to any of this stuff."

Rainey was replaced by Joey Radziwill, who made his recording debut with SACRED REICH on "Awakening". Released in August 2019 via Metal Blade Records, the band's first LP in 23 years marked SACRED REICH's first release since the return of drummer Dave McClain.

Rainey's wife, Renee Novak, told the Arizona Republic in 2020 that her husband was "a very gentle human being with a good soul who didn't like confrontation or any kind of conflict. He would go way out of his way for friends, and his friends would go way out of their way for him."

Novak said the split with SACRED REICH was hard on Rainey. "But honestly," she said, "he couldn't fulfill the requirements of a tour and all the things that go along with putting out a new album because of his health."

Formed in 1986, SACRED REICH was part of the second wave of thrash, along with TESTAMENT, DEATH ANGEL, DESTRUCTION and DARK ANGEL. Over the years, SACRED REICH had produced a catalog of politically charged aggressive songs that have stood the test of time.

SACRED REICH broke up in 2000 and remained inactive until 2006 when they received offers to play European festivals.