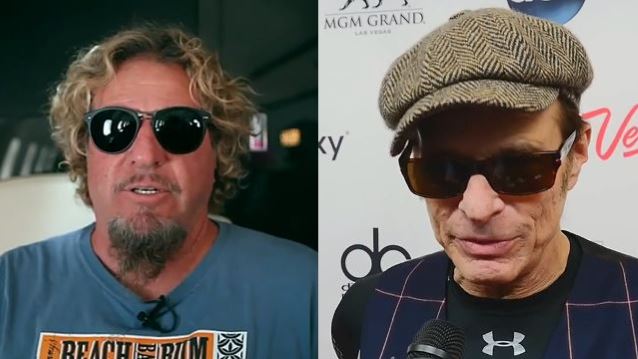 Ex-VAN HALEN frontman Sammy Hagar has fired back at the band's current singer, David Lee Roth, over comments Roth made about the possibility of VAN HALEN ever performing Hagar-era material with Dave on vocals.

Speaking to Billboard earlier this month, Roth was asked if he would ever consider tackling any of the songs that were originally recorded with Hagar during VAN HALEN's upcoming tour. Roth responded: "Well, there's a credibility issue there. Good, bad or in the middle, you know Roth means it; the other guy doesn't. And that's why it sold half as well. Literally, Midas Bible half. Never did better than half. And why would you bring that into the proceedings? This hamburger don't need no helper. [There] ain't no rehearsing pants in my closet."

Hagar has since responded to Roth's comments, questioning whether Roth could handle the vocals on a Hagar-sung VAN HALEN hit like "Right Now".

"The [VAN HALEN] boys are out on tour — happily doing well, I hope," Hagar said while introducing a live version of the song by his new band THE CIRCLE during the latest edition of the "Sammy Hagar's Top Rock Countdown" radio show, "but they're not playing any Van Hagar songs. My buddy Diamond said it was something about a quality issue. I laughed. I'm cracking up. You know, sometimes the guy says the wackiest things. But there's a lot of truth in that. A quality issue — you think about that. Think about them with Diamond, singing this next song, it would definitely be a quality issue, okay? [Chuckles] It would definitely be a quality issue."

Back in 2002, Roth and Hagar toured together performing separate sets and alternating the closing spot every night. Although Hagar has been known to fire a few zings Roth's way, Roth has never made any excuse about not being cool with Hagar taking over his role as VAN HALEN frontman, as he said during that tour when asked if things were patched up between the two. "Well, can you define patched up? [Laughs] It turned into a color… What is rock 'n' roll without a little bit of conflict, without a little bit of a drama? But I think that most of what's been going on with the Roth-Hagar tour is purely for your listening and dancing pleasure. Come on, what's the worst that a couple of rock stars could possibly do? A little slap fighting, an elaborate healing process and a reunion tour."