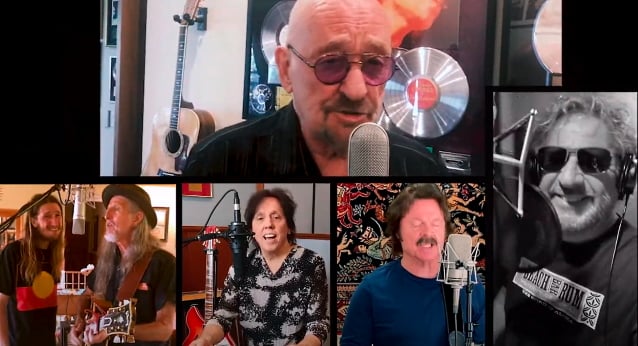 Sammy Hagar joined Dave Mason and a several other legendary rockers, including Mick Fleetwood, Michael McDonald and THE DOOBIE BROTHERS to record a quarantine cover of the 1968 TRAFFIC classic "Feelin' Alright'".

"Who would have thought that this would go on to be covered by so many different artists and bands, you just never know," Mason said in a statement. "But what I do know today is that people need some hope and comfort and especially music, which is why I called up some friends to rerecord a special version of the song. To do this remotely was somewhat challenging, hence the name 'THE QUARANTINES,' but the spirit of strength, hope and heart prevail."

Added Hagar: "I've always been a fan of Dave Mason since TRAFFIC. He's written some classics that I've cut my teeth on... learning how to play and write songs myself. 'Feelin' Alright' is one of my favorites.

Mason and Steve Winwood are the only surviving members of the original TRAFFIC lineup, which was inducted into the Rock And Roll Hall Of Fame in 2004.

Winwood last toured as TRAFFIC in the mid-1990s with the band's drummer, Jim Capaldi.