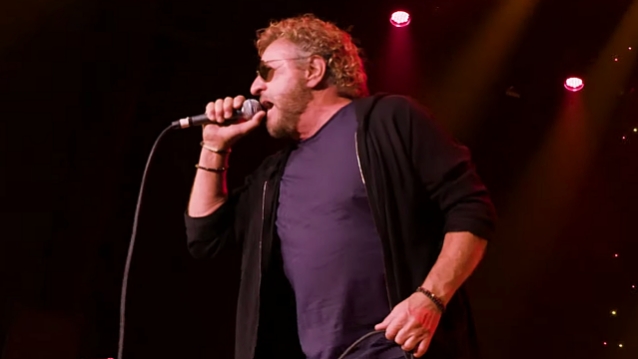 In conjunction with a recent OC Weekly feature, rock legend Sammy Hagar (VAN HALEN, THE CIRCLE, CHICKENFOOT) spoke at length about his career with writer Clay Marshall. Some select interview "outtakes" follow (as transcribed by BLABBERMOUTH.NET).

On having no plans to retire:

Sammy: "Being one of the few that are still upright at my age is quite the honor. Half the thing that makes me so healthy and so vibrant and able to do things that I did when I was 40 is because I'm happy to do them. I don't have to do things that I'm not happy to do. Some people have to work, you have do this and and that, and I'm not dogging that — I'm just saying it makes my life so much easier, it makes me so happy, because I don't have anything to complain about. I'm not miserable, ever. It's great — it's good to be me [Laughs]... I say no to so many things, you wouldn't believe it. Everybody thinks that I must just do everything that comes along, but I say no to so many things because I think, 'Ah, that's not going to be enough fun.' Everything I'm doing is really because it's fun, and it does keep me alive. It's things I want to do. I think that if I stopped and tried to retire and slow down, number one, I would be bored to death. My wife would probably kick me out of the house, and we'd probably have to live in separate houses. When I'm busy, I'm the best, and my energy stays up and I don't start getting insecure and thinking about other things, and then I don't start daydreaming. I'm a real daydreaming, creative person, and if you give me five minutes off, I'll start a new damn business."

On knowing when to say when:

Sammy: "If you have a drinking problem, you probably don't want to hang around me. I don't have a drinking problem, and I don't have a drug problem. I never did. I've never been to rehab, never had to go to rehab. I never woke up in the morning saying, 'I need a drink. I've got the shakes.' I told my mother years ago when I first started making the booze — she said, 'Oh, you've got to be careful.' She was all sick and my father was a horrible alcoholic and died of it, at a young age — 56. I said, 'Mom, if I ever wake up in the morning with the shakes and feel like I have a drink just to get going, I'll never drink again.' That's a promise I made to myself and everybody else. I don't have the disease — and it's a disease — and it makes me feel guilty because I've got family members that have it. It makes me feel guilty once in a while when I'm out there pushing the party. That's my lifestyle, but I don't do that all night. I have a way of drinking. If you're going to drink tequila, you go, you do a shot. Then you get a margarita and you nurse that margarita until it gets warm or it's gone. You don't slam it. And by the way, I don't do a whole shot, either. A shot, to me, is two or three sips. Then you dance or you get on stage and play a little bit. An hour later, you're sweating — 'Ah, do another shot.' And you get another margarita. You can do that about four times throughout a six-hour period, and you're fine. You go home, you go to bed, eat some tacos in the middle of all that, and you wake up the next day feeling great. But if sit there and do, like, eight shots in a row, and your buddy's [like], 'Okay, let's do one more,' about two hours later, 'Whoo, I ain't feeling so good.' You've just got to drink responsibly. You know what? Drive responsibly. Fuck responsibly. Raise your kids responsibly. Do it all responsibly, dammit."

On why CHICKENFOOT ended up not reuniting this year, despite Joe Satriani hinting as much several months ago:

Sammy: "Blame Chad Smith. I'm joking — I love Chad...We'll do a thing here and there. For instance, at the birthday bash this year, I'm [doing a] reunion with THE WABOS, my old band. We'll only play Sammy Hagar [solo material]. THE CIRCLE plays everything — we play VAN HALEN; we play CHICKENFOOT; we play MONTROSE; we play one LED ZEPPELIN song. We had to narrow it down — we used to play three or four, but now we only play one, because of the new album, 'Space Between'. We're down to one MONTROSE, one CHICKENFOOT, one LED ZEPPELIN. CHICKENFOOT, we'll get around to it. I love doing reunions, but THE CIRCLE is my band now. I want everybody to know that."