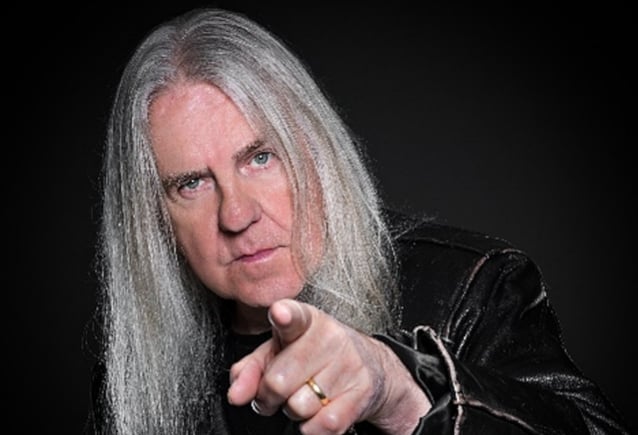 SAXON's BIFF BYFORD: 'I Don't Think Guys Like Me Retire'

In a new interview with Ruben Mosqueda of Photo Concerto, SAXON frontman Biff Byford was asked if he can picture himself retiring in the not-too-distant future. He responded (as transcribed by BLABBBERMOUTH.NET): "No, retirement is not really [something I think about] at all, really. That word, I don't really relate to it much, because if I retired, I'd be doing something with music. I don't think guys like me retire."

The 71-year-old singer continued: "You get bands that retire, then, like, six months later the singer brings out a solo album. He's not really retiring, is he? Retiring a band and retiring yourself, I suppose it's totally different, isn't it?"

Four years ago, Byford dismissed Jay Jay French as "a silly little man" after the TWISTED SISTER guitarist criticized other bands for continuing to perform well past their prime. At an April 2018 Spooky Empire convention in Orlando, Florida, Jay Jaysaid that the members of SAXON are "80 fucking years old" and called the current touring lineup of JUDAS PRIEST "a cover band." Jay Jay went on to say that TWISTED SISTER called it quits in 2016 because the members of the band wanted to go out while they could still deliver the kind of performances that earned them the reputation as one of the strongest live acts around.

During an appearance on the "Thunder Underground" podcast, Byford explained that SAXON's insistence on releasing new music more than 40 years into the band's career had little to do with any commercial aspirations.

"There are six or seven [classic rock and metal] bands out there that release albums regardless of whether they're gonna be platinum or not," the singer said (hear audio below). "For us, it's not really about being at the top of the charts anywhere. It's nice if you're in the charts, obviously, but it's all about how many people buy the record and how many people come see you live. We deserve to be bigger in America, without a doubt, and we're making strides to do that. Some people might think it's a bit late, but it's never too late, really, and we've proven that.

"There are a lot of bands out there that [are still releasing new music]," he continued. "SCORPIONS, they're all putting albums out. WHITESNAKE put albums out, MOTÖRHEAD put albums out, [IRON] MAIDEN put albums out, we put albums out. If you don't put albums out and you're just going out doing the odd show and playing your big hits, then I can understand it being totally boring for people. Because you can't tour it constantly if you're just playing hits. You can go every two years and play your hits, but you can't keep going back every four or five months — you can't do that. So I think that bands like TWISTED SISTER, they've retired, they've stopped, [and] they [aren't interested in putting] another album out, because they know it's not gonna be platinum. So therefore, in their eyes, it brings down their profile, but in actual fact, it doesn't, 'cause people never forget the hits. And actually, if anything, they get more credibility, 'cause they're out playing the hits from the '80s, whatever hits you have, plus the new stuff. So I think it rejuvenates a band. I think you get a new audience and people like it. Obviously, they have to be good albums. There's no point releasing a piece of shit, 'cause that won't work. You have to have a great album. You can't polish a turd. The albums have to be of a certain quality."

He added: "I just think it's your personal choice, and it's nobody else's business, actually, what I want to do, or what a guitarist wants to do. If a guitarist wants to say, 'I've had enough,' then he's had enough. And he goes home and… I don't know… I don't know what the guy, Jay Jay or whatever they call him… He'll go and sit on the porch in his rocking chair with his pipe and slippers and fade away. We're fucking Vikings. We don't do that shit."

SAXON's new album, "Carpe Diem", will be released on February 4 via Silver Lining Music. The LP was produced by Andy Sneap (JUDAS PRIEST, EXODUS, ACCEPT) at Backstage Recording Studios in Derbyshire with Byford and Sneap mixing and mastering.