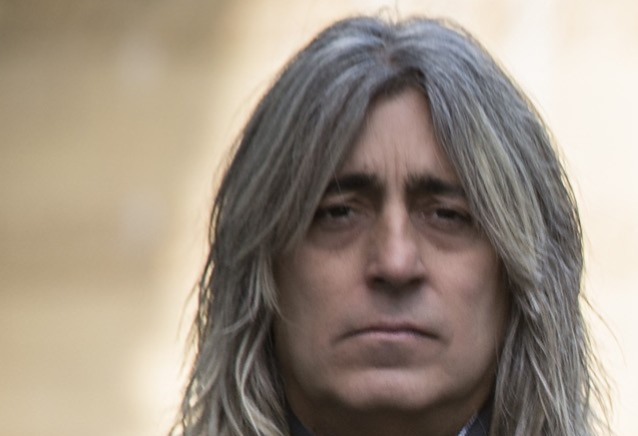 SCORPIONS Drummer MIKKEY DEE: 'I Don't Think You Can Keep The World Shut Down Anymore'

SCORPIONS drummer Mikkey Dee spoke to the "RRBG Podcast"about the progress of the recording sessions of the band's upcoming studio album. Recorded at Peppermint Park Studios in Hannover, Germany, the disc will mark the German-Polish-Swedish hard rock legends' first release since 2017's "Born To Touch Your Feelings - Best Of Rock Ballads", which was an anthology of SCORPIONS' new and classic material.

"We're working very hard here, wrapping up the recordings of the record," Mikkey said (as transcribed by BLABBERMOUTH.NET). "And we are in the beginning of mixing; we started mixing the songs. We've been working since early fall on this album. It's gonna be a great record. It's all recorded live in the studio. And it's a good vibe. It's a harder record, and great songs. So it's gonna be great to get this one released."

Asked if the songs were already written before he got involved in the recording process, Dee said: "Most of the stuff Rudolf [Schenker, guitar], Klaus [Meine, vocals] and Matthias [Jabs, guitar] have been writing, but then we've been putting it together in the studio together, kind of. But most of it's been written, yes. But we worked really hard, all five [of us], on these tracks."

Regarding when fans can expect to see the new SCORPIONS album released, Mikkey said: "I guess the release of the record is gonna have to be matched somehow to when we can actually start touring. I had the hopes up that we would release this this spring. That was the plan from the beginning, and I've been telling magazines about us releasing it in the spring, but it's not gonna happen, I don't think. Because it has to be matched to the touring — unless something completely crazy happens. But I would think in the fall or something like that, hopefully.

"It's impossible [to predict when we will be able to tour again]; you can only hope," he continued. "I'm done speculating in this shit, because once you get a little bit of a stream of hope, it's been shut down immediately. One day you hear this; next day, you hear a completely opposite thing. All this fucking second wave [of COVID-19] and third wave. Now they're talking about a fourth wave. And there's mutations from every fucking country in the world. If we're gonna continue adapting after that, we're talking 15 years. So, I don't know.

"But I'm hopeful," Mikkey added. "And, yeah, I'm positive that we're gonna have to get back out there soon. Because no matter what happens, I don't think you can keep the world shut down anymore. It's just the end."

Dee went on to say that he knows the "seriousness of this virus," having battled it himself in March of 2020. "I was influenza sick, thank gosh," he explained. "But some people are not that lucky, of course, but most of the people are really the elderly people and people with underlying diseases that turn out to get really, really sick. And then, of course, you have some exceptions with young, healthy people, of course. And I realize the seriousness of it.

"The world has been shut down for one full year now," he concluded. "And that can just not continue like that. It's a disaster in so many other ways than the virus. That's how I see it. It's very, very unfortunate."

Earlier in the month, Dee told the "No Fuckin' Regrets With Robb Flynn" podcast that SCORPIONS were forced to abandon their plans to work with producer Greg Fidelman on their new album.

SCORPIONS originally intended to record the new album in Los Angeles with Fidelman, whose previous credits include SLIPKNOT and METALLICA. However, because of the pandemic, some of the initial work was done with Greg remotely, after which SCORPIONS opted to helm the recordings themselves with the help of their engineer Hans-Martin Buff.

According to Mikkey, the new SCORPIONS album is being mixed by Michael Ilbert at the legendary Hansa Studios in Berlin, Germany.

Meine previously told Talking Metal that the goal with using Fidelman to produce the new LP was to bring "the old vibe from albums like 'Blackout', 'Love At First Sting' or even 'Lovedrive'. We try to focus on those albums and this attitude," he said. "If we get there, who knows — it's so many years later. But it's the spirit and it's the whole vibe around this album. This time, the focus is on the harder songs."

According to Meine, SCORPIONS' new LP will feature "no outside writers at all," unlike 2015's "Return To Forever", which was largely co-written by the album's producers, Mikael Nord Andersson and Martin Hansen.

Fidelman began his career as the guitarist and songwriter for RHINO BUCKET before launching his career as a producer, engineer and mixer, finding an early mentor in Rick Rubin.

SCORPIONS' last full-length collection of new recordings was the aforementioned "Return To Forever", partially comprising songs the band had in the vault from the '80s. It was the final recorded appearance of SCORPIONS' longtime drummer James Kottak, who was dismissed from the band in September 2016. He has since been replaced by Dee, formerly of MOTÖRHEAD.