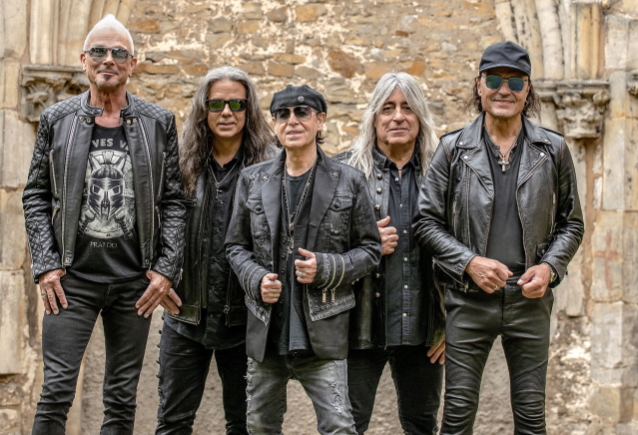 Hammersmith is an event venue located in the London district with the same name. Some artists who performed there were THE WHO, QUEEN, AC/DC, MOTÖRHEAD, METALLICA and SCORPIONS.

"Hammersmith", which was originally a bonus track on the U.K. edition of SCORPIONS' latest album, "Rock Believer", is not just an anthem to an iconic music venue, it is also a contemporary manifesto, showing just how much enthusiasm they still have for hard rock, the roots of their fame and original metal.

"The song," says SCORPIONS singer Klaus Meine, "takes us back to a time when we played in the smallest clubs, just dreaming about being able to perform in the Temple of Rock, the Hammersmith Odeon."

The music, composed by SCORPIONS founder/guitarist Rudolf Schenker, drummer Mikkey Dee and Magnus Ax, gives Meine a great opportunity to prove that not only he can perfectly intonate the balladesque tones of the great SCORPIONS songs, but that his rock voice is incredible as well. An almost brutal start, in which the great ex-MOTÖRHEAD drummer Dee is already letting off steam, followed by driving guitar sounds, opens the stage for Meine's vocal excursion. Mixed with harmonic riffs, repeatedly interrupted by aggressive drumming, "Hammersmith" is something very special in SCORPIONS' brand-new repertoire. One of the highlights is when lead guitarist Matthias Jabs masterfully rocks his instrument until the song reaches its finale. As Meine sums it up: "Rocks like hell!"

"Rock Believer" was released in February. The LP was recorded primarily at Peppermint Park Studios in Hannover, Germany and was mixed at the legendary Hansa Studios in Berlin, Germany with engineer Michael Ilbert, who has earned multiple Grammy nominations for his mix work with producer Max Martin on albums by Taylor Swift and Katy Perry.