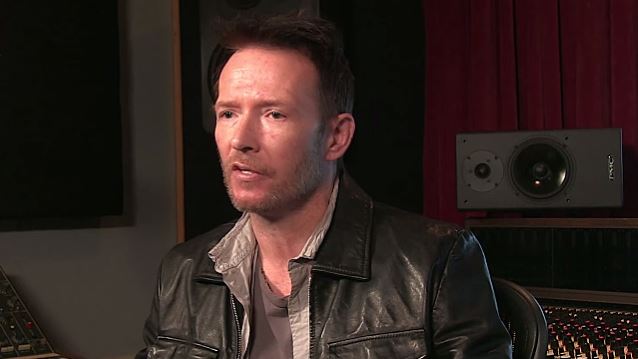 SCOTT WEILAND On Split With STONE TEMPLE PILOTS: 'It's A Shame How It Happened'

Ex-STONE TEMPLE PILOTS singer Scott Weiland says that the way he was ousted from the band was "a shame" and blames his split with the group on the fact that the other members of STP "got different management."

STP fired Weiland in February 2013, claiming that his own solo activities and erratic behavior were detrimental to the band. The group then teamed up with LINKIN PARK singer Chester Bennington, debuting the new lineup and a new song called "Out Of Time" in 2013 at a California radio festival.

Speaking to QMI Agency, Weiland said about his exit from STONE TEMPLE PILOTS: "It's just a shame how it happened. I said I needed six months off. I felt we needed six months off in order to do a 20th-year-anniversary tour and that 20th-anniversary tour didn't end up happening and I said, 'Okay, then we need to make a new record because we can't go on just playing the greatest-hits set. It's not going to work. We're losing fanbase. Our guarantees are starting to go down.' So I assumed we were all on the same page when we left tour and it turned out not so and they got different management and things just soured."

He continued: "[I've known them] since I was a teenager. Crazy things happen, especially when you end up getting different management. People see things one way and a lot of times how things are portrayed to the bandmembers are through the goggles of the management and filtered through that and that's what you end up hearing."

STP eventually sued Weiland, with the singer firing off a countersuit and claiming that they could not use the band name without his involvement. He also told AZCentral that his former bandmates were "selfish" and "disrespectful."

In a recent interview with iChill.ca, Weiland said about STP's collaboration with Bennington: "They made an album and it sold 35,000 units. That's kind of unbelievable considering STP sold over 40 million and I'm sure Chester's band LINKIN PARK has sold pretty much the same amount. It didn't work, though. People weren't buying into it."

STONE TEMPLE PILOTS' last studio album with Weiland on vocals, 2010's "Stone Temple Pilots", sold 62,000 copies in the United States in its first week of release to debut at No. 2 on The Billboard 200 chart. The CD marked the sixth top 10 for the band — its entire output of studio albums with Scott on vocals. Only its greatest hits package "Thank You" missed the top 10 (No. 26 in 2003).