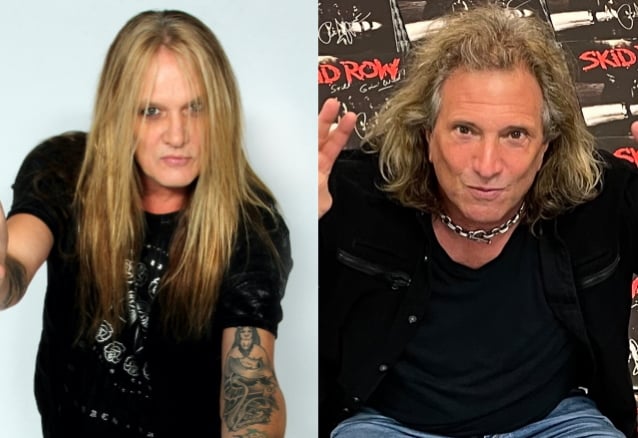 Sebastian Bach has joked that he is starting a new band called HARD2WORKWITH with his former SKID ROW bandmate Rob Affuso.

On Tuesday (November 22),Bach took to his Instagram to share a new photo of him with Affuso, and he included the following message: "Discussing our new project 'Hard2WorkWith' with my old friend @officialrobaffuso so great to see you dude. so much fun hanging out with you @upstaging_inc 50th Anniversary Bash we are still recuperating! What an incredible time! Lookin' forward to jammin' w u sometime soon!"

Affuso responded to Bach, writing in the comments section: "Yea Brother!! So great to see you again and have the time to catch up. Awesome night! I am DEFINITELY still recuperating from my five days in LV! Glad you and Suzanne made it out! Let's do it again soon! …..and yea….let's make some music even sooner!"

Affuso joined the former SKID ROW singer on stage in September 2019 at Sony Hall in New York City to perform the band's classic song "Makin' A Mess". He previously reunited with Bach to play SKID ROW songs on at least two other occasions — a 2011 show in Poughkeepsie, New York where Affuso played "I Remember You", and a 2016 show in the same city where he played "Rattlesnake Shake".

Asked in a 2021 interview with the "Metal From The Inside" podcast if it's fun for him to get up on stage with Bach from time to time and perform some of these songs again, he said: "Of course it is. It's also nerve racking, to be honest, because they're up there doing it every night, and I have to remember these songs that I recorded 20 years ago, or 30 years ago. But it's great. And it's always great to see him. And it's always great to see the other guys. We're now all over the country in different places — I'm on the East Coast, Sebastian's on the West Coast, Rachel's [Bolan, SKID ROW bassist] in the middle of the country, in Nashville, Snake [Dave Sabo, SKID ROW guitarist] goes back and forth from there to New York, Scotti's [Hill, SKID ROW guitarist] in L.A. So I don't really see those guys very much. Sebastian does reach out when he comes through the New York area, or anywhere in the Northeast, and see if I wanna come by, which is really cool. I appreciate that."

Affuso — who left SKID ROW in 1998 and claims to be "the only former member that keeps in contact with all former SKID ROW bandmates and is still good friends with them all" — said in a 2016 interview that he was hopeful that the classic SKID ROW lineup could rekindle its friendships and reunite for a tour and possible new album. "I am friendly with all four other guys," he said. "I've worked hard at it. I spent a third of my life with these guys and I felt that I shared an immeasurable amount of things with them and they will always be very, very dear and important to me. Human relationships are very important to me. Those relationships with these guys were very important, so I've tried to nurture the best I can with each of them some form of relationship, however it looks. As far as everybody… I'm really not in a position to talk about that. I think everybody has had their piece and their say, and I think that there's things that probably should have been said a long time ago and weren't. And, you know, I'm not sure if I'd ever… I'd never say never, but, you know, I mean… I would certainly love to see it, but we'll see what happens. I don't know."

In June 2019, Bach issued an "open invitation" to the other members of SKID ROW's classic lineup to "get onstage and jam" during the vocalist's tour celebrating the 30th anniversary of SKID ROW's debut album. A few days later, during an interview with Finland's Kaaos TV, Sabo confirmed that he would not accept Bach's latest overture. "I'm working with my band," he said referring to SKID ROW's current lineup. "This is SKID ROW, and this is what I do."

Bach joined SKID ROW in 1988 as the replacement for the band's original lead singer Matt Fallon, who sang on demo versions of songs that were eventually re-recorded for SKID ROW's first LP.

SKID ROW's 1989 multi-platinum, self-titled effort featured the Top 10 hits "18 And Life" and "I Remember You" and was supported by a six-month tour with BON JOVI.

Bach fronted SKID ROW until 1996, when he was fired. Instead of throwing in the towel, the remaining members took a hiatus and went on to play briefly in a band called OZONE MONDAY. In 1999, SKID ROW reformed and, after a bit of shuffling over the years, featured a lineup consisting of original bassist Rachel Bolan and guitarists Dave "Snake" Sabo and Scotti Hill, alongside drummer Rob Hammersmith and singer Johnny Solinger. SKID ROW fired Solinger over the phone in April 2015, a few hours before announcing ex-TNT vocalist Tony Harnell as his replacement. Eight months later, Harnell exited the band and was replaced by South African-born, British-based singer ZP Theart, who previously fronted DRAGONFORCE, TANK and I AM I. Theart was fired from SKID ROW in February and replaced with ex-H.E.A.T. vocalist Erik Grönwall.

Bach added: "It's just a shame because our fans would like it, and there's no reason why not to."