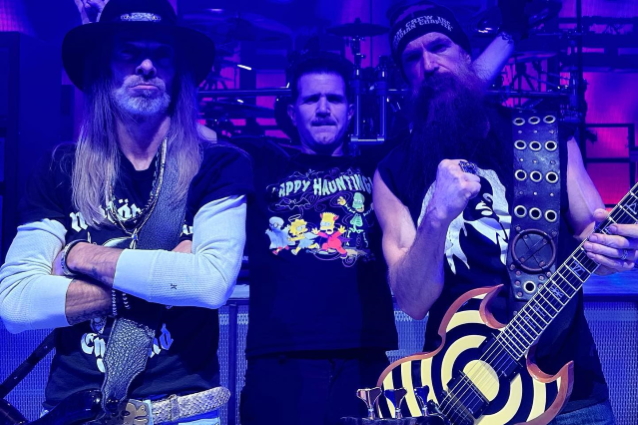 The first photos from the rehearsal sessions for PANTERA's upcoming shows can be seen below.

Benante took to his social media on Sunday to share the rehearsal pictures from a New Orleans studio, and he included the following message: "2 weeks in NOLA with these boys, it's been a lot of work but how could it not?. So much heart and soul is going into it.

"This is all about the Love for Vinnie and Dime ,the fans and the music that these 4 created.

"I'm really enjoying playing these songs -they sound Great! It's very emotional and it's just starting to hit me…

Grady Champion, who was Dimebag's guitar tech throughout his career with PANTERA and who has "signed on" to assist the band with the upcoming tour, shared an Instagram photo of him and Zakk, and he wrote in an accompanying message: "This is such a pleasure for me. Seriously. It's coming. I get to listen to this man and this band play everyday for, I dunno groundhog days. I get to enjoy the artistry of Father Zakk. He's cooking man, and I'm in the kitchen eating everything.

"I got to fill in for [Zakk's guitar tech] Stephen Christopher Murillo for a couple of days, and I'm feeling a stronger vibe by the day. I get to play with buttons and pedals like old times, and MOST of all, we are honoring the boys memory. Stronger than all. Here for the right reasons. I'm already 7 cries in."

Next year, PANTERA will appear at Germany's Rock Am Ring and Rock Im Park, two simultaneous rock festivals, which will take place June 2-4 in Nürburgring and Nürnberg, respectively. Later that same month, they will perform at the Sweden Rock Festival, set to take place June 7-10 in Sölvesborg, Sweden, and at the Tons Of Rock festival, which will happen June 22-24 in Oslo, Norway.

2 weeks in NOLA with these boys, it’s been a lot of work but how could it not?. So much heart and soul is going into...