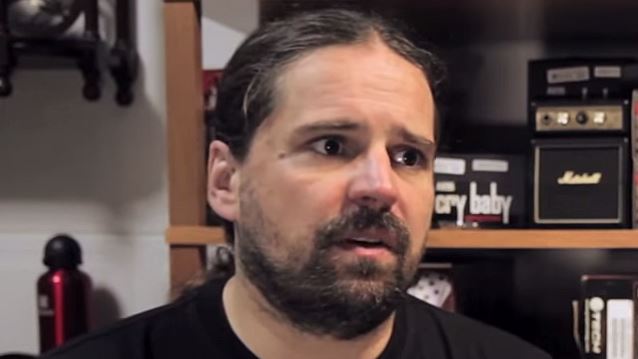 During a recent interview with Dan Newton, guitarist Andreas Kisser of Brazilian/American metallers SEPULTURA was asked if any of the persistent rumors about a reunion of the band's classic lineup fueled the anger SEPULTURA felt while making its latest album, 2013's "The Mediator Between Head And Hands Must Be The Heart".

He continued: "You know, since [Max] left the band, we are used to deal with that, but there's a time that it's enough. I mean, in the end, it was his choice to leave the band; we never fired anybody, we just fired our manager — we fired Gloria — but we never fired Max or [original SEPULTURA drummer] Igor or [ex-SEPULTURA drummer] Jean [Dolabella]. Everybody left the band because they didn't feel it was the right place to be. And that's fine. You cannot [force] anybody to be there just to be there as a puppet."

According to Andreas, SEPULTURA has dealt with the reunion talk by doing what it has always done: creating new music while exploring previously uncharted territories.

"We follow our steps, we always try new things," he said. "We played with so many different bands. I mean, after [using] the percussion of Brazil, we used Japanese percussion on 'Against', and [we collaborated] with different musicians and we tried using books to inspire [our lyrics and music]. We follow the SEPULTURA spirit, which is [not to rest on our laurels]. We're always trying something new and trying to reach new levels of musicianship and lyric-wise and stuff and artwork and everything."

He continued: "I mean, this album ['Mediator'] really helped us to be further away from everything of that bullshit. So, it's definitely a very special, strong album. With [our record label] Nuclear Blast as well doing a great job. So, yeah, everything's there. I think our expression, as always, it's in our music. That's why we put everything we think in our lyrics, and we don't have fear, or we're not afraid to try out new things, to express what we want to through our music. And the bottom line [is], we love what we do, man. I mean, it's a privilege to be a part of a band like SEPULTURA, celebrating 30 years after so many changes inside and outside the band. Because when SEPULTURA started, we only had fax machines as a technological tool. And then came CDs and MDs and downloads and grunge and everything, and we're still here. So I think it's a fantastic feeling, definitely."