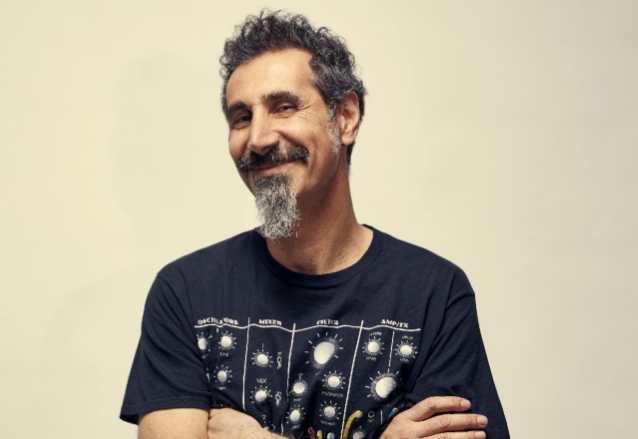 Serj Tankian is known around the world for his extraordinarily unique and dynamic musical creativity, especially as the lead vocalist and lyricist of the Grammy Award-winning band SYSTEM OF A DOWN. Like his bandmates, he has continually worn his Armenian identity as a badge of honor and has advocated for Armenia and other human rights causes with a passion that matches his inimitable vocal style.

Visitors to Stephanie's Art Gallery in La Cañada (Los Angeles) from October 9 to November 1 will be able to appreciate another side of Tankian's creativity, his visual art, in a special exhibition titled "Shapeshift: A Dynamic Dive Into Diversity".

Serj's journey into the world of fine art began with his "Disarming Time" musical paintings in 2013. He creates a uniquely audible and visual experience with each of his artworks. Each piece is accompanied by a musical score that has been composed by Serj that is as integral to his artistic expression as the paint on the canvas.

The embedded music is currently unlocked and accessed via Arloopa, a free mobile application for iOS and Android devices that allows those looking at his artwork to listen to each painting's corresponding musical score. Tankian's vision to utilize smartphone technology as the conduit to unlock the intertwined relationship of music and art was the first of its kind.

"My music always has been nonconformist and challenging — and revolting at times," says Tankian. "I paint the same way. I don't look at what people do, I don't paint within the parameters. I do what my intuition tells me to do. When I'm painting, I am free as an artist. My hands go where they're supposed to go, I don't know what I'm doing. But I never knew what I was doing as a musician either, I just created and was confident in the fact that it is coming from a good place. I'm still in the phase where I'm surprised by the output. I am lost in this exploratory, beautiful, colorful world and I am grateful."