Sharon Osbourne was forced to miss her husband's concert in Mexico over the weekend after she forgot her passport.

Sharon and Ozzy flew to Mexico City on a private jet on Friday, but she did not realize her passport was at home until they touched down over the border.

Taking to Instagram, Sharon uploaded a black-and-white photograph of Ozzy on board and said: "Ozzy on his way to Mexico and performing in front of 80,000 people and I had to miss the whole thing as I forgot my passport at home in the U.S."

The 65-year-old later explained the mishap during her show "The Talk" on Tuesday (May 8).

"I was on that plane, and we landed in Mexico City at, like, twenty to six in the evening on Friday and I realized I had forgotten my passport," she said. "So the first thing you think of is, 'Oh. If I sit here, I can get somebody to bring me my passport. I'll sit here for five hours. We're in the airport, and then I can go through immigration. Well, no. I couldn't. Ozzy had a show to get to and all of the guys were going to the show, he had to leave me. And so I'm there with the pilot, and then we were saying, 'Somebody will come with the passport.' They said, 'No you can't. It doesn't work that way. You have to leave the country.' But you can't get on a plane without your passport! This was a private plane, but if you want to go on a commercial airline, you need your passport to get back to America, so the airlines wouldn't take me. So I'm stuck."

Mexican authorities originally wanted to put Sharon in a "holding tank" but finally agreed to let her private jet take her back home to Los Angeles. However, at that point, the airport had already closed, leaving Osbourne to sit on the runway until the next day.

"So then we said, 'Okay. This plane will take me home. Fine,'" Sharon recalled. "So they refilled the plane and the authorities there were saying, 'Fine. You can just leave. Fill the plane and go.' Well they knew that the airport was going to close, and so they closed the airport, and I was sat on the runway in the plane."

Ozzy headlined the second day of the Corona Hell & Heaven festival. Also appearing on the bill were JUDAS PRIEST, MARILYN MANSON and SAXON, among others. 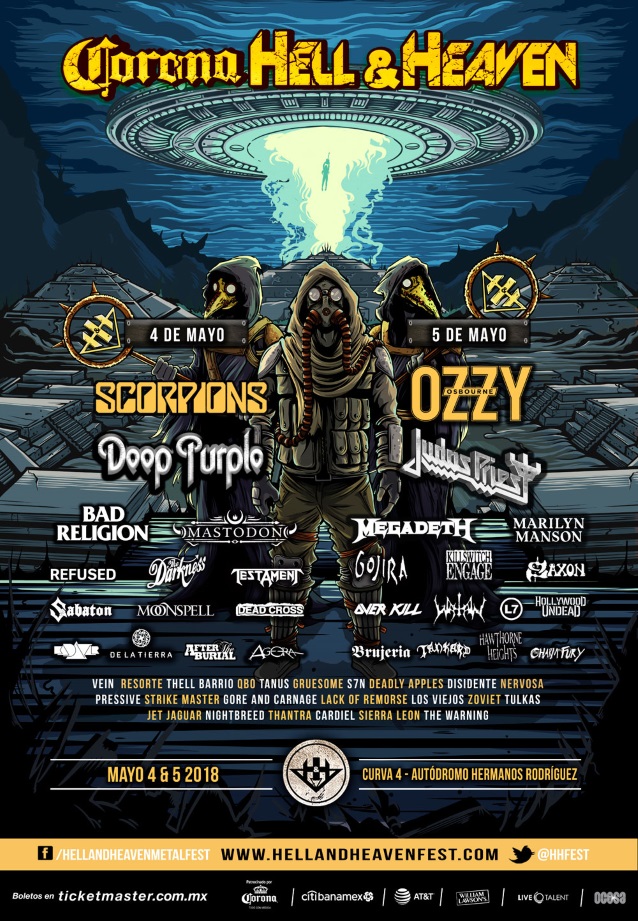