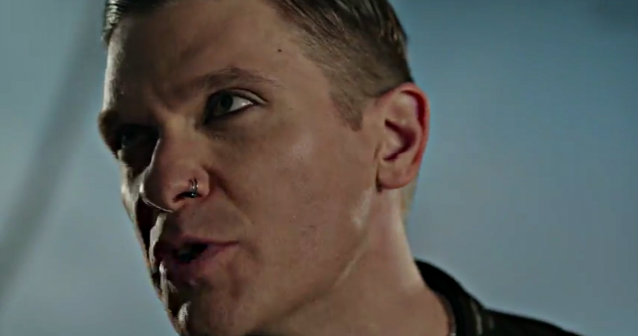 SHINEDOWN: 'Through The Ghost' Video Released

SHINEDOWN's video for the song "Through The Ghost" can be seen below. The track is taken from the band's fourth album, "Amaryllis", which came out in 2012. The CD was somewhat of an underperformer for SHINEDOWN, following the platinum-plus sales and chart success of its previous effort, 2010's "The Sound Of Madness".

SHINEDOWN reportedly entered the studio in January to begin work on its fifth album. Few details on the project are available, but drummer Barry Kerch told The Pulse Of Radio that the band had plenty of songs written already. "I'd say well over 30 songs," he said. "There's quite a bit of material out there, it's just, is it gonna work? Is it gonna flow with whatever that record's sound is at that time? Because really, records are a time capsule of what you're going through at that period in your life, so once you start piecing that together, even if it's a good song or a song that you really like, is it gonna fit on this record man? You have to go through that whole process. It can be painstaking for sure, but in the end you get a great record."

SHINEDOWN singer Brent Smith and guitarist Zach Myers released four more acoustic cover songs on March 18, including their take on BON JOVI's classic ballad "Wanted Dead Or Alive". The four tracks were originally part of an album called "(Acoustic Sessions)", but did not get certain permissions in time from the original artists, forcing the six other tunes to be issued as an EP.

The four additional songs, which also include covers of ADELE's "Someone Like You", PEARL JAM's "Black" and PHIL COLLINS' "In The Air Tonight", came out under the title "(Acoustic Sessions, Pt. 2)".