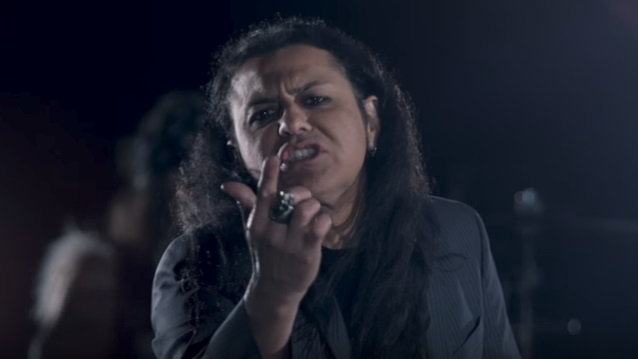 Singer Oni Logan has once again left LYNCH MOB, the band he has been in and out of for almost three decades.

In a Facebook post headlined "A brother has left the building," Logan wrote: "As a new year shines a light, so do new beginnings. Some that make the heart flutter and some that just have to happen.

"I've been the original vocalist for LYNCH MOB on and off for many years, I've played a lot of great shows and traveled a lot of miles with this band, I'm very proud to have been a part of the recordings and the brotherhood," he continued.

"I'd like to say thanks to the fans who have continued to come to our shows over the years and for all your interest in what we had to say in our new recordings.

"Very excited for 2018! I'll be putting together a new recording and touring project.

"Writing and recording has always been the most satisfying aspect in being a musician.

"I'll be looking forward to writing with other artist and bands.

"2018 is wide open and I'm feeling a sense of new beginnings coming on."

Asked what it is about his chemistry with Lynch that keeps him coming back to the band after leaving the group several times in the last few years, Logan said in a 2014 interview: "It's [George's] undeniable riffage — the riffage of the sexiness that he supplies to me that I get from no other. I can never get it from any other.

"We have a special thing going on," he continued. "It's been like that forever. And if you were to ask him, [he would tell you] the same thing: it's like no other. It's just the way that it works. Somehow, the energy and the synergy of what it about, it works together. He evokes the riffs that just make me wanna fucking write. That's fine and simple. That's it. He's magical, he's a purist, he's a deep thinker, and I think he acknowledges me as the same.

"When he tells me, 'Oh, man, that was a great lyric,' I take that and run home with it. 'Cause we're acknowledging each other.

"I think we just need to let things happen at this stage. And I'm always gonna be there for it."