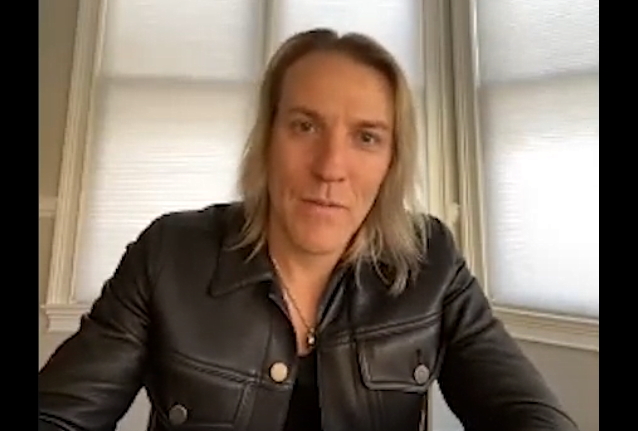 In a new interview with the "Tales From A Gemini" podcast, SKID ROW's Rob Hammersmith was asked to name his top five drummers and biggest influences. He said (as transcribed by BLABBERMOUTH.NET): "I'm gonna start with a couple of obvious ones… John Bonham [LED ZEPPELIN]. Obviously, for a reason… Cozy Powell [RAINBOW, BLACK SABBATH]. Any metal guy knows who Cozy Powell is. The list of albums and iconic bands that he played in, it's out of control. Phil Rudd [AC/DC] — for me, he's been the blueprint by which I approach music, the way I approach drums. I know there's a lot of debate out there; some guys aren't impressed with him. That's fine. They're missing out. For me, he's kind of the blueprint; that's what I go by. Mickey Curry is another guy. [He] may not be a household name, but when I talk about… It's startling when you start doing research how many… We were talking about THE CULT earlier; he's the guy that played drums on those iconic CULT records. The list of albums and groups and artists that he's played with, to say it's impressive is kind of an understatement. I've gotta say for that fifth one, it kind of ebbs and flows a little bit. For what I do in the hard rock world, you've gotta mention Tommy Lee [MÖTLEY CRÜE]. I mean, there's a reason why his name comes up as much as it does. He's just another guy — talk about kind of laying out a blueprint for guys in the hard rock world. Maybe not so much the heavy metal world, but in the hard rock genre, man, that was a game changer for a lot of us. So he's probably in my list of top five as well."

Rob's musical journey began at an early age in a small town outside of Buffalo, New York. Starting out in the cover scene, Rob quickly developed an appreciation for a solid back beat and playing for the song — an approach to drumming that he still considers the foundation for his style today. Later settling in Atlanta, Georgia, Rob's drumming quickly gained attention in the rock underground.

Prior to joining SKID ROW in 2010, Rob spent many years touring and recording with Atlanta-based rockers ROCKETS TO RUIN and has performed with GUNFIRE 76, the band featuring onetime MURDERDOLLS frontman Wednesday 13.

When he first hooked up with SKID ROW, Hammersmith stated about his then-new gig: "Having always been a fan, it is an honor to be asked to join the band. The band's music and history holds a special place in both my life and the lives of so many loyal fans. To be a part of that history is the chance of a lifetime."