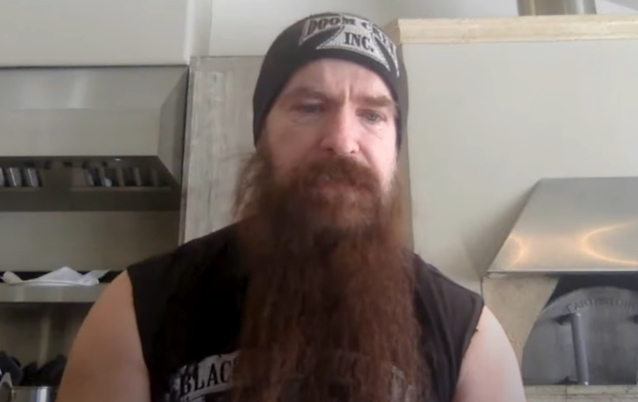 ZAKK WYLDE: If OZZY OSBOURNE Wasn't A Legendary Heavy Metal Singer, He Would Be A Stand-Up Comedian

During a recent appearance on AXS TV's "At Home And Social With…", BLACK LABEL SOCIETY's Zakk Wylde spoke about his long-standing friendship and working relationship with legendary BLACK SABBATH singer Ozzy Osbourne. He said (as transcribed by BLABBERMOUTH.NET): "I always said, with Ozz, it's a miracle any work ever gets done just because we're constantly… All's you gotta do is hang out with him for, like, five minutes, you'll be on the floor crying. 'Cause he's always taking the piss out of himself or whatever else is going on in the world. He's the best. I was thinking if he wasn't this legendary frontman and singer and everything like that, he'd have to do stand-up [comedy]. He's the best. He's hilarious."

Asked if Ozzy has had a chance to listen to the new BLACK LABEL SOCIETY album, "Doom Crew Inc.", Zakk said: "He tried. He goes, 'Zakk, I really enjoy the new album.' I was, like, 'Ozz, what song do you like the best?' He goes, 'I like the part before you put it on and when it ends, and I also like the parts in between the songs when it's just silence.' I go, 'Thanks, Ozz.' And he goes, 'Carry on. Good luck with the record.' I'd expect nothing less. [Laughs]"

It was announced in April 2017 that guitarist Wylde would be rejoining Ozzy's backing group for all his future solo show dates. Osbourne's touring lineup also includes Rob "Blasko" Nicholson on bass, Tommy Clufetos on drums and Adam Wakeman on keyboards.

Although Zakk does not appear on the legendary heavy metal singer's latest LP, "Ordinary Man", he has already laid down his guitar tracks on Ozzy's upcoming follow-up effort, tentatively due in early 2022.