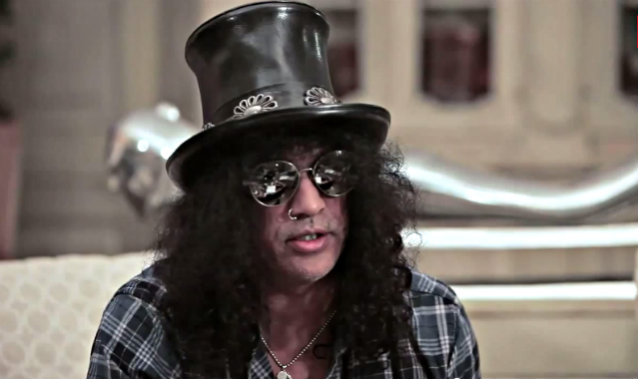 A new clip of Slash discussing the cover artwork of his third album, "World On Fire", can be seen below. The cover was designed by American contemporary artist Ron English, who previously worked with the axeman on the 2010 collaborations album "Slash".

"World On Fire" will be released on September 15. Slash and MYLES KENNEDY & THE CONSPIRATORS recorded 17 songs for the follow-up to 2012's "Apocalyptic Love". Among the other tracks on the record are "Shadow Life", "Automatic Overdrive", "Wicked Stone", "Bent To Fly", "Battleground" and the title track, which also serves as the set's first single.

The former GUNS N' ROSES member and Rock And Roll Hall Of Fame inductee is taking his band on the road this summer for both headlining dates and a tour with AEROSMITH.