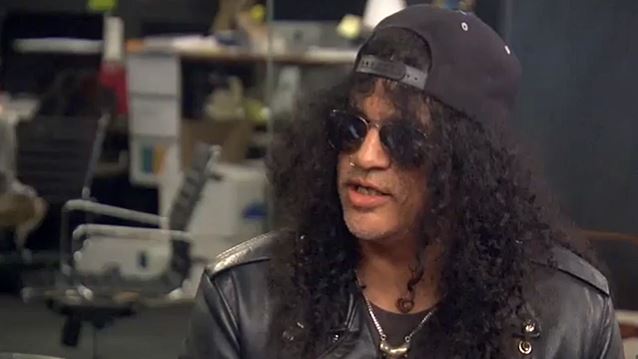 During a recent conversation with HuffPost Live about his new album, "World On Fire", legendary guitarist Slash admitted that he has no idea what GUNS N' ROSES' 1992 video for the song "November Rain" was all about.

"You know what?! To tell you the truth, I have no idea," Slash responded when he was asked about the meaning of the clip (see video below). "Well, it was a concept. The song itself is pretty self-explanatory, but the video is so complex. And I remember when Axl [Rose, GUNS N' ROSES lead singer] was writing it, it just became… It was so epic, it was like a movie. And I, not being a huge videos and making videos especially, I just showed up for my scenes. I [would] write my own scene and [I would indicate what I wanted to] do in my section. I never paid attention to the rest of the whole production. So at the end of the day, I never really knew… I knew there was a wedding in there somewhere and I was not into the concept of the wedding."

Slash added he even "frowned upon" the wedding idea because "it seemed to me like what I would do."

"November Rain" appears on GUNS N' ROSES' "Use Your Illusion I" album.

Slash revealed in his autobiography that an early, 18-minute version of "November Rain" was recorded at a session with guitarist Manny Charlton (of rock band NAZARETH) in 1986, before the sessions for GN'R's debut album, "Appetite For Destruction" began.

Slash and Axl have not spoken since Slash left GUNS N' ROSES 18 years ago. Rose said in a 2009 interview with Billboard, "What's clear is that one of the two of us will die before a reunion and however sad, ugly or unfortunate anyone views it, it is how it is."

"World On Fire" came out on September 16.