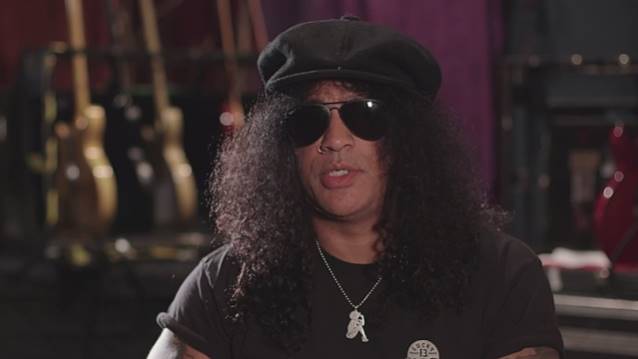 SLASH: 'If Touring Was As Sparse As Radio Is For Rock And Roll, We'd Have A Lot Of Trouble'

Legendary guitarist Slash (GUNS N' ROSES, VELVET REVOLVER) was recently interviewed on the Italian radio station Radio DeeJay. You can now listen to the chat at this location. (Note: The Slash interview begins around the 40-minute mark.)

On the lack of "real" rock and roll on commercial radio stations:

Slash: "If touring was as sparse as radio is for rock and roll, we'd have a lot of trouble. The rock and roll fans are as fantastic now as they've ever been. It's strange how that happens. But the business itself is, like, 'No, we'd like to be making money off commercial music.'"

On his upcoming third solo album, "World On Fire", which contains 17 songs:

Slash: "We always record a lot of material, but usually what I do, I keep the record down to, like, maybe 12 song and the extra ones come out with the deluxe record later. But, you know, people don't wanna have to go out and buy two records. So I just put it all on one record. It's 77 minutes [long]. Not quite as long as 'The Godfather' [movie]."

"World On Fire" will be released on September 15. Slash and his band, MYLES KENNEDY & THE CONSPIRATORS, recorded 17 songs for the follow-up to 2012's "Apocalyptic Love". Among the tracks on the record are "Shadow Life", "Automatic Overdrive", "Wicked Stone", "30 Years To Life", "Bent To Fly", "Battleground" and the title track, which will also serve as the set's first single.

The former GUNS N' ROSES member and Rock And Roll Hall Of Fame inductee will take his band on the road this summer for both headlining dates and a tour with AEROSMITH.

The headlining shows begin on July 9 in Hampton Beach, New Hampshire, with Slash and his boys joining AEROSMITH the next night (July 10) in Wantagh, New York.