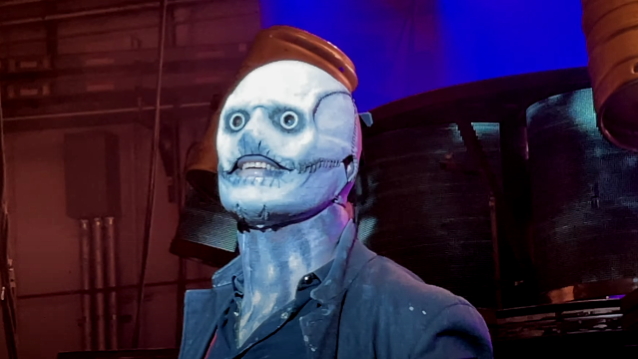 According to the official product description, "These gigantic stickers are printed on a brushed alloy substrate that gives it a strong, silver and eye-catching appearance. In pristine condition it reflects light and catches color... get it a little scuffed up and it starts to look even more alive.

"These things are BIG. Clocking in at a towering 5" tall, these things are bigger than most people's palms (go ahead, measure!) The SLIPKNOT front man's newest mask is larger than life in the form of this metallic alloy sticker.

"This is a special mask, so it deserved to be made of something special.... before you slap it wherever you slap it, then it's in your hands. It's one glorious looking sticker!"

SLIPKNOT is currently headlining the 2021 incarnation of the "Knotfest Roadshow". Support on the trek is coming from three Grammy-nominated heavy music luminaries, KILLSWITCH ENGAGE, FEVER 333 and CODE ORANGE. The 28-date run, produced by Live Nation, kicked off following the band's Knotfest Iowa hometown show in Des Moines on September 25, with the tour then snaking its way across the U.S., wrapping up in Arizona in early November.