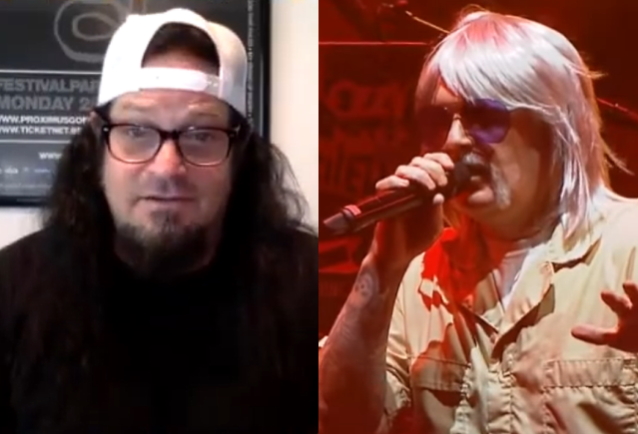 SNOT's MIKEY DOLING Is Still Mad At LIMP BIZKIT's FRED DURST For Taking Rapper $NOT On Tour: 'F**k You'

SNOT guitarist Mikey Doling has once again blasted Fred Durst for agreeing to take rap artist $NOT out as one of the support acts on LIMP BIZKIT's spring 2022 tour.

This past March, LIMP BIZKIT announced that it would return to the road in April for a month-long tour called "Still Sucks". The trek was to include support by SCOWL, WARGASM UK, $NOT, DYING WISH and YUNG GRAVY for various shows. Three days later, Doling shared a since-deleted video message on his social media in which he called out Durst — whom he referred to as a "friend" — for seemingly having approved the addition of $NOT to LIMP BIZKIT's upcoming tour.

Doling touched upon his beef with Durst in a new interview with Pierre Gutiérrez of Rock Talks. He said: "What happened was that LIMP BIZKIT… First of all, they're friends of SNOT from 25 years ago. We were close with them. [Late SNOT frontman] Lynn [Strait] and Fred Durst were buddies. Then Lynn passed away. Fred's even on [the Lynn Strait tribute album] 'Strait Up'. And then all these years later this rapper guy comes out calling himself $NOT. And I'm already, like, 'Wait. What's going on here?' And unfortunately, time passed and we had one record; we weren't quite big enough to fight him for that name. So I just kind of let it go 'cause it was a different genre of music — it's hip-hop; he's a black dude. We're a bunch of white-boy fucking rockers. I just thought [it was] two different worlds. And then all of sudden fucking LIMP BIZKIT is taking $NOT [out on tour]. I'm, like, 'What?' Like, taken aback, like, 'How dare you, Fred?'

"I would never do that," Doling continued. "If Fred Durst had passed 25 years ago, we had had so much respect in Fred's name. And then all of a sudden SNOT is now big, and we took this rapper called Limp Bizkit on tour. That would be some disrespectful shit… But I didn't say anything yet. But then I started getting text messages, e-mails, social media texts, IMs, 'Hey, SNOT's going on tour with LIMP BIZKIT.' So now I'm getting frustrated because I'm trying to answer [everybody], 'No, it's not us.' It's getting really tiring. So I went on Facebook and made a post. That's it — just a post on my personal Facebook. 'Hey, Fred, that's pretty fucked up you did that.' I got mad, put my middle finger in the fucking camera — boom! It went viral from my Facebook. It goes on Blabbermouth to Loudwire to RollingStone.com — everywhere. And everybody's calling me, like, 'Dude, what are you starting fights with LIMP BIZKIT now?' It just got blown way out of proportion.

"But I will still say — fuck you, Durst, for doing it," Mikey added. "And the rapper kid stole our fucking name. I even talked to the rapper's manager. I went that far into this thing. And he goes, 'Oh, I'm a big fan of SNOT.' He said, 'I used to listen to you guys in high school.' And now he's managing a guy named $NOT. I'm, like, 'So you knew.' … We got no respect. We got fucked over."

Asked if he has spoken to Fred since his social media outburst in March, Doling said: "No, I haven't talked to him in decades — a long time. But he knows. I'm sure he heard about what I said. He probably tells everybody he [doesn't] care, but he knows inside that that's fucking bullshit. Unless he's just a shallow human, which he probably is. So, there you go."

One day after BLABBERMOUTH.NET published an article on Doling's original video rant, $NOT took to his Twitter to share a link to a XXL magazine story about the BLABBERMOUTH.NET report, and he included the following comment: "This actually ridiculous. Old man mad about my name."

Mikey told Rock Talks that he "saw" $NOT's tweet and added: "He's 24 years old. That's just a 24-year-old kid responding. He doesn't know depth. Wait till he's my age. If somebody steals one of his songs or something, he'll be fucking upset.

"Instead of being respectful, saying, 'Hey, man, sorry if I ruffled your feathers. Nothing but respect.' … I'd be, like, 'Yeah, that's pretty cool.' But instead he came back… His fans were attacking me and shit.

"I mean, he could be $NOT too," Doling said. But then he added more dismissively: "Just fuck off. His career will be very short, I promise you that. We have a record that's stood the test of time for 25 years. This guy probably won't be around for another fucking six months.