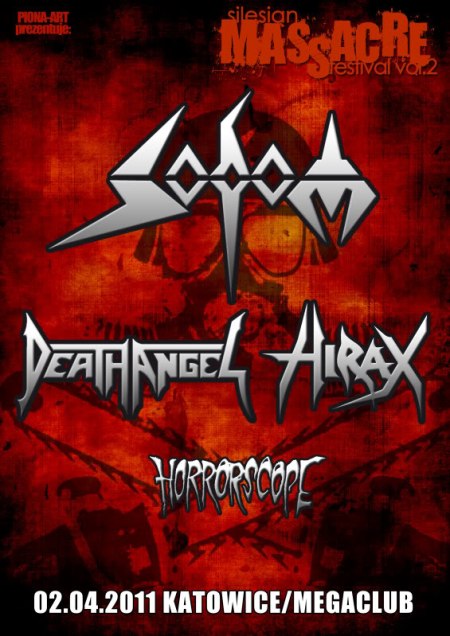 German thrash metal veterans SODOM have been forced to cancel their April 2, 2011 appearance at the Silesian Massacre Festival Vol. 2 in Katowice, Poland after the band's guitarist, Bernd "Bernemann" Kost, was rushed to the hospital. SODOM's booking agent, Fleisch, writes on the group's MySpace page, "We do not know what exactly has happened as I write this e-mail. [Kost] is currently under medical observation in the emergency section to discover exactly what the problem is.

"We feel very sorry, but unfortunately and obviously because of the situation as it stands at the moment the band cannot travel to Katowice on Saturday.

"I know it is not the best time and it is short notice, but the situation as it is with Bernemann leaves the band no choice. I hope for your understanding and I regret that this situation has come about. The band were looking forward to playing at [the] festival."

Freiwald previously played for the German bands DESPAIR and FLAMING ANGER and was involved with the VOODOOCULT project. In addition, he played percussion as a session musician on the MOONSPELL album "Irreligious" and is featured on the 1996 LP "Triarchy Of The Lost Lovers" by Greek extreme metallers ROTTING CHRIST.

A photo of SODOM's new lineup can be found below.

SODOM in November parted ways with drummer Bobby Schottkowski due to "personal and private problems between Tom [bassist/vocalist Thomas 'Angelripper' Such] and Bobby," according to a statement released by the band.

SODOM's new album, "In War And Pieces", entered the German Media Control chart at position No. 64. The CD was released in North America on January 11, 2011 via SPV/Steamhammer.