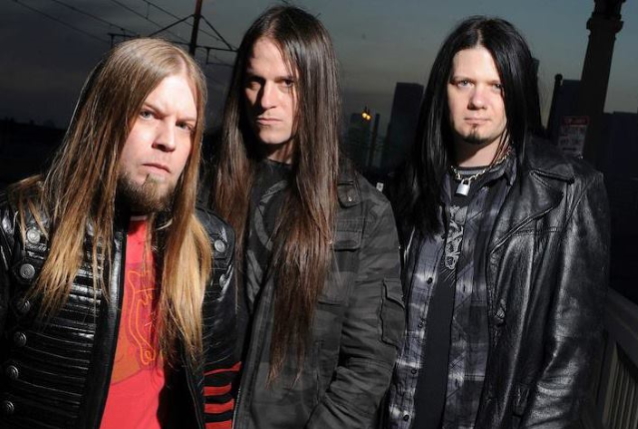 SOIL has released a "theatrical interpretation" of its song "One Love". Conceptually, SOIL wanted to do something different and interesting with the song since "One Love" originally appeared on the 2013 studio album "Whole". Indie filmmakers David Gregory (director) and James Morgan (director of photography) were tapped for the job. Filming was shot in the U.K. during SOIL's recent tour supporting STATIC-X.

SOIL bassist Tim King commented: "The director approached us with an out-of-the-box concept. It was an odd concept to not feature the band and make the video more of a mini movie rather than a music video. Also, with the song being six years old at this point, it really made no sense to launch it as something brand new or in a traditional way."

With the video having an approach of something similar to the films "The Witch" or "I Spit On Your Grave", the band felt it would be fun to debut the video on Halloween. It's something to celebrate the season while the band works on new material for 2020.

In a 2018 interview with Ryze-Up Magazine, King admitted that SOIL was "definitely long overdue for a new record." He said: "We have a bunch of ideas and some pieces of songs and things like that that we've been working on for a long time. But nowadays, with technology and the availability of everything, everybody kind of scatters. We used to all live in Chicago and we'd go in a sweaty rehearsal space and spend hours jamming together and really pound out stuff really fast. As you get older, and the way the world works now, everybody can be scattered and all over the place, but to reel that in, and sending music across the Internet and stuff, we've gotta focus a little bit more. So I think we're gonna go back to the old-school way and just lock ourselves in a rehearsal room for an extended period of time."

He continued: "We've tried everything every different way under the sun, but for this band, getting in a nice, sweaty rehearsal space and being in front of each other and laughing and making jokes and bouncing ideas off each other, that's where we've always gotten our best material. So I think we're going to jump back into that and see what comes. If it's five songs, 10 songs, 15 songs will kind of dictate what kind of a release will be next — whether it be an EP or a full-length or a double album, or whatever comes out of us."