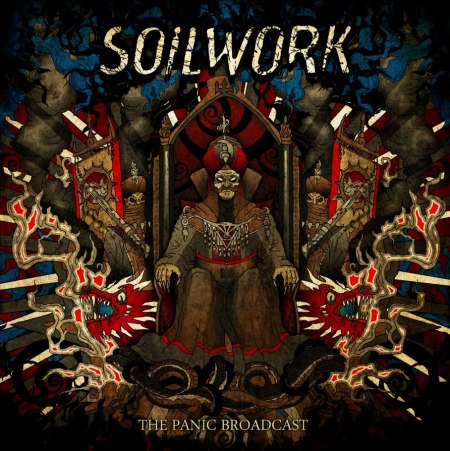 Audio samples of all the tracks that appear on "The Panic Broadcast", the new album from Swedish metallers SOILWORK, are available for streaming on Amazon.com.

"The Panic Broadcast" will be released in Europe on July 2 and in North America on July 13 via Nuclear Blast Records. The CD was mixed at Fascination Street studio in Örebro, Sweden with Jens Bogren (OPETH, KATATONIA, PARADISE LOST, BLOODBATH).

The song "Two Lives Worth Of Reckoning" is now available for streaming at this location.

SOILWORK's new album is the first to feature guitarist Peter Wichers since his return to the band in 2008, as well as the studio debut with axeman Sylvain Coudret, who also joined in 2008.

The recording process for "The Panic Broadcast" was overseen by Wichers, who recently took a moment to talk about what it was like to produce his own band after working with so many other great artists.

"Producing SOILWORK was great challenge for me but also one of the greatest experiences of my career," he said. "I can honestly say that I've never worked this hard on any record that I've produced, but it was all worth it. I am super-happy with the performances from all the guys, and I don't think SOILWORK has ever sounded this good."