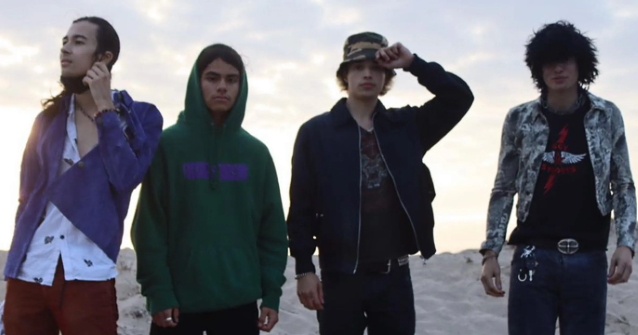 Tye had previously performed live with KORN and SUICIDAL TENDENCIES, while London is also a drummer in his other band CLASSLESS ACT, which opened for Slash on a 2018 tour. SUSPECT208 guitarist Niko Tsangaris also plays in CLASSLESS ACT.

Four years ago, Robert Trujillo told NBC Boston that his son was "fearless" while performing with KORN. "He [was] just bringing the performance, playing the songs, even improvisational moments within the set. Which is really a challenge, especially for… for anybody, let alone a 12-year-old."

In 2016, Robert Trujillo told Brazil's Globo Play that he "never forced" Tye to play music. He explained: "I always felt that if he wanted to embrace an instrument, great; I'd try to help him with it. So initially, at first, it was drums. And then around that same time, when he was one, he had a little plastic guitar, and he would play it all the time, just strumming it — always strumming it everywhere, to the point where the plastic was worn down."

He continued: "It's a beautiful thing, 'cause he's still a twelve-year-old, and he still acts wild and crazy, as a 12-year-old should, but when it comes to music, he's very focused."

Robert Trujillo told the Huffington Post that Tye is "an amazing bass player and a really great writer. The bass lines that he's writing and the riffs, I'm like, 'Man, I wish I had written that.' He's coming up with stuff on his own, but he's also been influenced by players like Jaco Pastorius, but also Miles Davis or BLACK SABBATH or LED ZEPPELIN. He's like a sponge. He loves funk. He loves James Brown, he's this little 12-year-old who's soaking up and embracing all this different music and I can tell that it's helping him creatively in what he's writing with his band."

In a 2018 interview with the "Appetite For Distortion" podcast, London Hudson was asked when he realized how famous his father was. "Since I was little, especially with the VELVET REVOLVER stuff, because that was the most I toured with him, was for the VELVET REVOLVER stuff," he said. "Seeing that many people at the shows was kind of crazy, and how they all just worshipped. Then going on the last GN'R tour, and seeing all those people who still like him for much older stuff, is when it really clicked, going on that tour. But it never really hit me until this summer, where I was like, I don't want to live in his shadow, when I started playing in the band. That's the main reason I don't play guitar or stringed instruments."