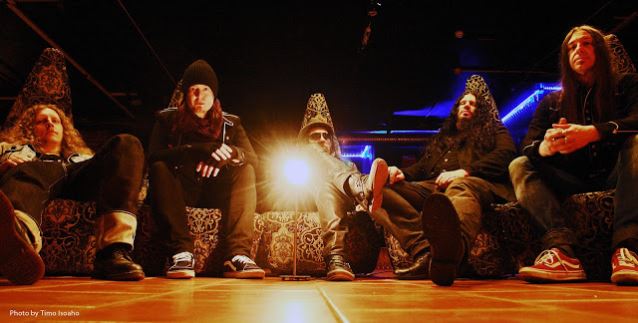 "Turn The Tide", the new video from SPIRITUAL BEGGARS — the Swedish band featuring ARCH ENEMY guitarist Michael Amott and bassist Sharlee D'Angelo, along with vocalist Apollo Papathanasio (ex-FIREWIND) — can be seen below. The song comes off SPIRITUAL BEGGARS' eighth studio album, "Earth Blues", which was released on April 16 (one day earlier internationally) via InsideOut Music.

Comments Amott: "Excited to have a second video off our 'Earth Blues' opus — just in time before we hit the road in Europe and Japan in October/November!

"We filmed this video in Mexico City and Cologne, Germany earlier this year while Martin Björnlund of Flat Feet Productions did a superb job on a heavy and psychedelic edit back home in Sweden."

Just in time for the upcoming tour, SPIRITUAL BEGGARS will reissue two of its classic catalog titles on October 14: the band's 2005 "Demons" album will be available for the first time ever on vinyl via InsideOut Music; and their acclaimed and hard-to-find debut LP, the self-titled "Spiritual Beggars" from 1994, will be re-released with over 70 minutes of unreleased bonus material via Century Media Records. Look out for more details about these titles soon.