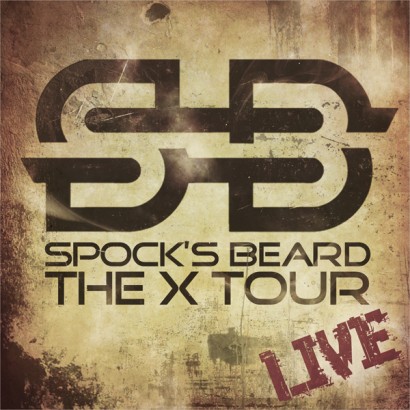 "The X Tour Live", the new release from progressive rockers SPOCK'S BEARD, out February 14 on Music Theories Recordings, documents the one and only American show from the acclaimed band's tour in support of their last studio album, "X".

Being spread out geographically makes live shows in the band's Los Angeles-area home base a rarity these days, but SPOCK'S BEARD was afforded the opportunity to do a one-off with CalProg promoter Jim Harrel at the Downey Civic Theater in Downey, California, during area rehearsals for an upcoming European tour.

"Jim Harrel puts on a helluva good production, so we really didn't have to stress out about technical details," said bassist Dave Meros. "He brought in a great sound system, lights, the venue was deluxe, and he treated us right."

At the time, there was no intention of recording a live album. "It was just a chance to play in the USA for a change, which we don't do nearly enough of," Meros said. "But the venue was already set up for 32-track digital recording and some friends of ours wanted to take a run at recording video as well, so it just kind of fell into our lap."

Meros admits that recording the first show of a tour is not the wisest of decisions in most cases, but for SPOCK'S BEARD, it couldn't have worked out better.

"The first couple of shows are when kinks are worked out and we gain confidence playing the set," said Meros. "We figured if we made some little mistakes here and there we could cover them up in the mix, and if the whole thing was horrible we could just simply not release it. But fortunately we had a pretty good show. Rob Aubrey did an absolutely superb job mixing the CD and DVD audio, so it sounds fantastic. The feedback has been great so far."

"The X Tour Live" is a two-CD set, and will also be available in a limited edition deluxe version that includes a bonus live DVD with exclusive extra features such as a photo slide show, backstage and rehearsal footage, a version of "Their Names Escape Me" without the names but a killer sax solo, and also a time lapse video of the stage setup.

SPOCK'S BEARD has established itself as the crème de la crème of modern progressive rock. Not simply a musician's band, SPOCK'S BEARD has also mastered the art of penning catchy, harmony-driven songs that will appeal to any fan of well-written pop songs. The music of SPOCK'S BEARD is a reflection of their varied influences, which include classical, pop, rock, jazz and jazz fusion, and R&B, while their intricate multi-part vocal harmonies and use of counterpoint add a whole other dimension.