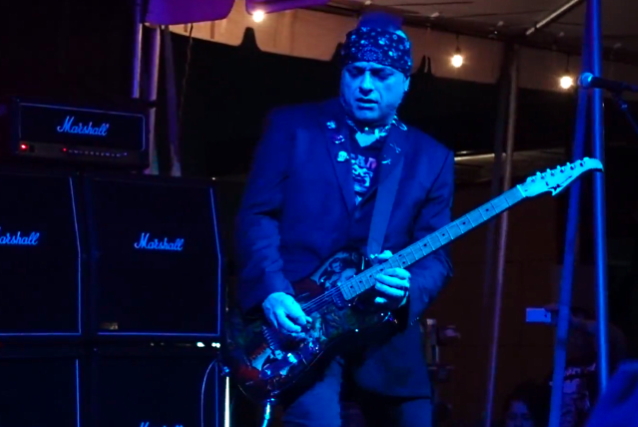 Guitarist Erik Ferentinos, who has played with RATT singer Stephen Pearcy for nearly two decades, says that he has not been approached to join RATT following the recent departure of Chris Sanders.

"I don't think I could have done both" Stephen's solo band and RATT, Ferentinos told "The Classic Metal Show" in a new interview (hear audio below). "That would have been weird. It comes down to promoters [telling Stephen], 'Well, [the current RATT lineup] is just your solo band.' I know they don't want that — when it comes to RATT. They already say that now. They're, like, 'This is just Stephen.' So, can you imagine if I was in there? Then it really would be his solo band, and they'd never hear the end of it.

"We've played together for so long — 19-plus years," he continued. "It's [Stephen's] own thing. And I know that's how he looks at it. And he doesn't wanna give that up to meld it together; he really doesn't want that. I've accepted that, and it's okay. I like what we do."

Pressed about whether he would accept the offer to join RATT if asked, Erik said: "Well, I wouldn't say no to it. And a lot of people have assumed that when this other guy left that they were gonna pull me into that. And I'm flattered that people thought that. But truth be told, I have not heard one peep out of those guys. Usually, Stephen would be the first one to go, 'Hey, we're gonna be trying people out. Why don't you come up?' There's no talk like that. Honestly, he and I haven't even discussed that aspect of who they're gonna get for this [upcoming RATT summer] tour. I just know that our communications now are the music that he and I are working on together, and that's it. But he did make mention, in texts and so forth, that he does wanna do another solo record and he does wanna do shows to promote it. So that's his words. So, according to him, the anwer is yes, we are gonna play together again at some point."

Pearcy told Sleaze Roxx that Erik was briefly considered for a position in RATT before Ziff and Sanders came along. "He's literally been in my band for years, in my solo band," he said. "He's a big part of my life, my solo records, the mixing, the engineering, just everything. I mean, we're like a team when I go in to do my solo records with Matt Thorne in the studio, and Erik and myself. We get in there and there is no stopping us, so I wanted to keep that a little separate, but he's always ready to go at any moment. He's a total professional."

Last month, RATT played a one-off show in Oklahoma as a four-piece following Sanders's departure. But according to Pearcy, the plan is for RATT to hire a new second guitarist prior to the launch of the group's next round of dates in late May.

Pearcy told SiriusXM's "Trunk Nation" that Chris's exit from RATT was amicable and he holds no ill will toward his former bandmate.

"The guy was involved with some other businesses, and he'd rather do that," Stephen said. "And it's way cool. Rock and roll isn't the only interest I have, to say the least, so be it."

Asked how RATT will go about finding a new guitarist, Stephen said: "We'll just do what we need to do — probably [hold] auditions, most probably, of course. Invitation only. [Laughs]"

On the topic of whether he and his bandmates would entertain bringing a guitarist that had previously played in RATT back into the group, Pearcy was firm: "No, nobody will be returning for anything."

Last month, Chris released a statement to Mike Gaube's Headbangers announcing his retirement from the music industry. He wrote: "At the beginning of the year, I sent an email to [RATT's] management that I would not be renewing my contract for 2020. After playing music in some form for 25 years, I've retired from the industry."

RATT will join forces with Tom Keifer, SKID ROW and SLAUGHTER for a U.S. tour, dubbed "The Big Rock Summer Tour", this spring and summer.

Last November, Pearcy revealed that he was in pre-production for his sixth solo album with Ferentinos.