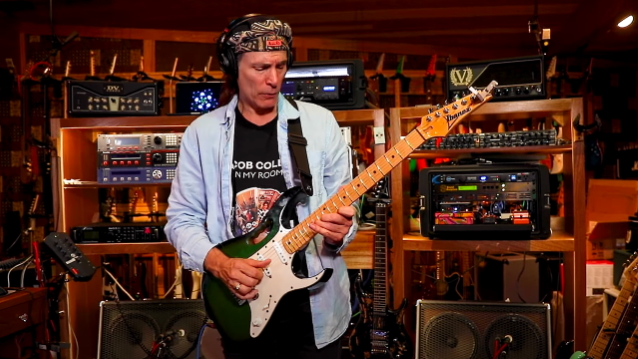 Legendary guitarist Steve Vai has released a new song called "Candle Power". Earlier today, Vai posted a video of him performing the track via his social media, and he included the following message: "Hey Folks, Vai here. I wanted to challenge myself for my 60th birthday and decided to record a simple trio track. I gave myself some parameters to work within. I told myself I would use a Strat style guitar, (tougher for me to play then a Jem) use a very clean tone, (not conventional for me) no whammy bar, (that’s like losing a body part for me) and no pick, just fingers (way out of my comfort zone). I also had this idea for a particular type of riff that can only really be played on a guitar with no whammy bar. It's a technique that I call 'joint shifting.' This is where you bend a note while fretting another, but I wanted to do this technique with a combination of double and triple stop single note bends while fretting other notes and releasing bends. After considerable experimenting, I discovered it created a unique sounding passage. You can hear this technique on a few sections of the song. I certainly hope other ambitious guitar player see the potential in this technique and take it to the moon!

"We shot this quick little video of me performing the track at my Harmony Hut studio.

"During this period, the world is slowly starting to recover from the Covid-19 pandemic. Many people are still facing challenges and are eager to find entertainment on the internet. I have seen the best come out in many people during this challenging time. When people join together with a common positive intention, the power surge they create within the collective is the healing element that is most needed. Like many little candles coming together to burn as bright as a star.

"I needed a title for the song, and with the above in mind, and the fact that it's my 60th, I choose the title 'Candle Power'. We are even issuing a limited edition commemorative 'Candle Power' candle in the new vai.com merch store that also comes with a high-quality download of the song."

Last September, Vai released a Blu-ray edition of his 2015 live DVD, "Stillness In Motion", via his personal record label Light Without Heat, distributed by The Orchard. The release features Vai's complete performance at Club Nokia in Los Angeles on October 12, 2012.