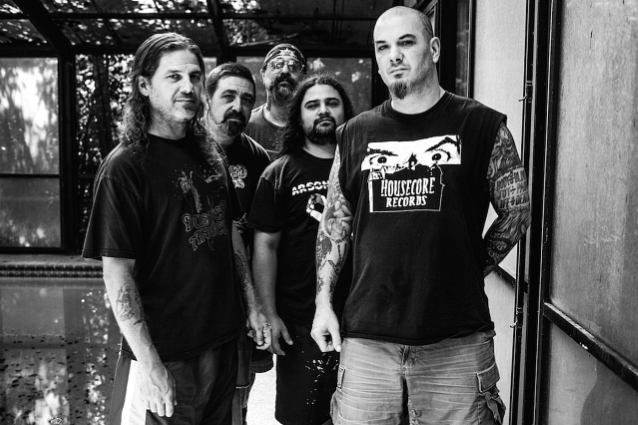 SUPERJOINT Is 'Done': 'We Don't Wanna Do It Anymore'

SUPERJOINT guitarist Jimmy Bower says that the band is "done" for good.

SUPERJOINT's latest album, "Caught Up In The Gears Of Application", came out in November 2016 via singer Philip Anselmo's Housecore record label. Since then, Anselmo and bassist Stephen Taylor have focused primarily on Anselmo's PHILIP H. ANSELMO & THE ILLEGALS solo project, which released its second album, "Choosing Mental Illness As A Virtue", in 2019.

Asked in a new interview with Pierre Gutiérrez of Rock Talks if there are any updates on SUPERJOINT's future activities, Bower said: "SUPERJOINT's done, man." When Gutiérrez pressed Bower about whether he means that the band is done "for good," Jimmy responded: "Uh huh. We don't wanna do it anymore. We got back together, did a new record and we toured for, like, two or three years. And that's it. [Philip and Stephen are] focusing on THE ILLEGALS and I'm doing EYEHATEGOD."

Bower'a comments come more than a year after Taylor said that he had "no idea" if SUPERJOINT would ever make more music or tour again.

"I think the response [to 'Caught Up In The Gears Of Application'] was a little less than expected, maybe," Stephen said during an August 2020 appearance on the "Not These Two Fucking Guys" podcast. "I don't know if the record did as well as they anticipated. I don't know what happened. I guess it got a mixed reception, and we just never expanded on another one. And Jimmy started doing EYEHATEGOD, and then we just kept on with the ILLEGALS, and then we started writing the EN MINOR stuff, which is basically all the same people — just revolving to different bands."

"Caught Up In The Gears Of Application" was recorded at Philip's New Orleans-area studio, Nodferatu's Lair and was produced by Anselmo and Stephen Berrigan. The effort was mastered by Scott Hull (AGORAPHOBIC NOSEBLEED, PIG DESTROYER) at Visceral Sounds.