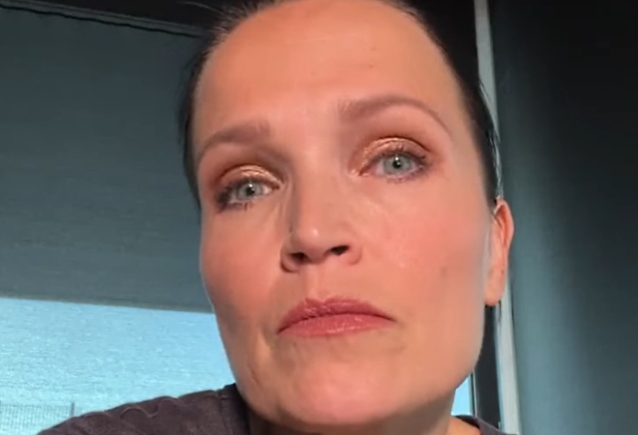 TARJA TURUNEN On Always Evolving Musically: 'I Hate Repeating Myself'

During a November 23 Instagram Live chat with fans, former NIGHTWISH singer Tarja Turunen was asked about her tendency to evolve musically on every album and never repeat herself. She said (as transcribed by BLABBERMOUTH.NET): "I face a challenge every time I start working on a new album. I face a challenge — or many challenges, actually. The biggest one of them is that I hate repeating myself. So I'm one of those artists that don't like repeating themselves. There are artists, there are bands that have found their way and sound in one song and they continue repeating it, and it works. And then there are artists that always evolve, always progress, and I'm absolutely one of those.

"Since I don't like repeating myself, when I'm writing material, when I'm just improvising, gathering around song ideas," she continued. "And then I go back… In the moment, it feels all good. 'Oh, this could be a nice song.' And I go the next day and I listen to what I recorded, and I [go], 'Holy hell. This sounds again like 'The Shadow Self' or 'Silent Masquerade' or… No. [Laughs] I hate repeating myself…

"Yeah, it's a challenge," Tarja repeated. "But it's who I am. But in everything. As a person also, I don't wanna get stuck in my life. I want to progress. I want to learn about myself more. I wanna travel. I wanna see things. I wanna learn. It's important to me. Find new ways. Get inspired. It's the way I am."

Last year, Turunen released her first book, "Singing In My Blood", via Rocket 88. Written and compiled over the first year of lockdown, Tarja searched through scores of photos and memories to create a big, deluxe book about her life in music. There are contributions from friends and colleagues who've played a part in her music on stage, in the studio and at home, alongside lots of previously unseen intimate photos from childhood to the present day.

The 45-year-old Finnish-born singer, who currently lives in Spain (after previously residing in both Finland and Argentina),was fired from NIGHTWISH at the end of the band's 2005 tour by being presented with an open letter which was published on the NIGHTWISH web site at the same time. In the letter, the other members of NIGHTWISH wrote: "To you, unfortunately, business, money, and things that have nothing to do with emotions have become much more important."

Tarja will release a new collection, "Best Of: Living The Dream", on December 2 via earMUSIC.