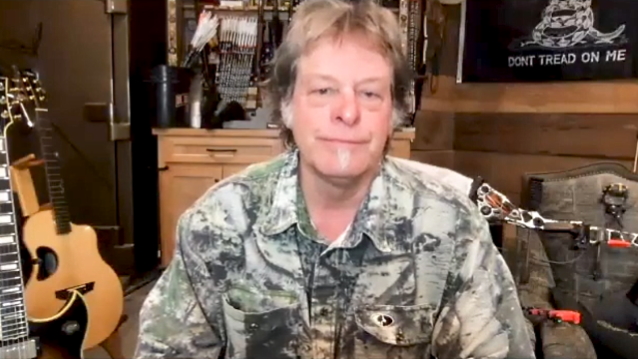 TED NUGENT: How DONALD TRUMP Ended Up Naming My Next Studio Album

Ted Nugent has explained how Donald Trump ended up naming his next studio album.

The outspoken conservative rocker addressed the topic during an appearance earlier this week on the "Bolling With Favre" podcast.

He said (as transcribed by BLABBERMOUTH.NET): "When we were in Michigan, we did these [Trump] rallies [ahead of the 2020 presidential election] — the unprecedented rallies of 25 thousand, 30 thousand people that were chanting, 'We love you! We love you! We love you!' The only time it's ever happened in history, because here came a hell-raising president, a 'we the people', constitutional, businessman president that secured the border, that reduced crime rates, that reduced unemployment, that renegotiated global contracts to actually benefit America. Just a great, great man, a great president. And I'm in the audience, 'cause I would promote these events. And we really escalated the attendance, because Uncle Ted, especially in the winter wonderland of Michigan… And he would always acknowledge me. [He'd go], 'Where's that Ted Nugent? Well, there he is. Ted, we're so glad you're here. You know you're a handsome devil.' And I go, 'Whatever.' And so my new record's gonna be called Ted Nugent 'Handsome Devil'. And we actually have the audio of the president saying that."

Last month, Nugent said during a Facebook Live stream that he would record the follow-up to 2018's "The Music Made Me Do It" album in May and June.

In the past, Ted has called Trump "the greatest president in our lifetime," and has said that the billionaire real estate mogul represents "the heart and soul of the best American families out there."

Nugent has carved a permanent place in rock 'n' roll history as the ultimate guitar-shredding showman, selling more than 40 million albums and performing nearly seven thousand high-octane live shows. As a budding musician, Nugent was strongly influenced by Chuck Berry and Bo Diddley, and knew he wanted to pursue that type of sound and attitude. Early bands THE ROYAL HIGHBOYS and THE LOURDS paved the way for the AMBOY DUKES — and their psychedelic "Journey To The Center Of The Mind" kicked young Ted's career into hyper drive. The axe maniac soon broke out as a solo artist, where the guitarist's prodigious talent, ear-shattering volume and over-the-top stage antics quickly earned him the moniker of Motor City Madman.

Cranking out hits like "Cat Scratch Fever", "Just What The Doctor Ordered", "Free For All" and the iconic "Stranglehold", Nugent garnered international acclaim and truly hit his stride, becoming one of the top-grossing tour acts in America. His no-holds-barred career now spans six decades of multi-platinum hits. The ultimate Road Warrior, touring and recording continue at Ted's breakneck pace. Nugent and his inimitable sound have been featured on VH1's "Behind The Music", A&E's "Biography" and more. He was named "Detroit's Greatest Guitar Player Of All Time" by readers of MLive.