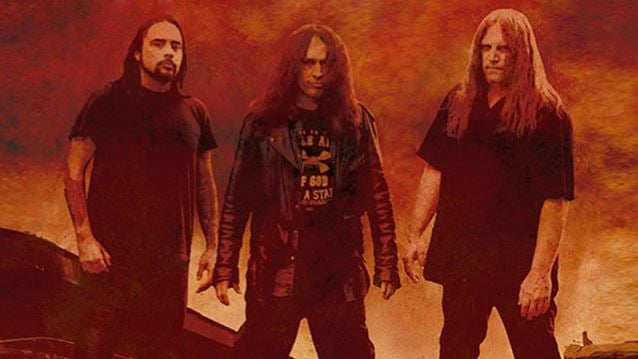 TERRORIZER Signs With THE END RECORDS

The End Records has announced the signing of legendary grindcore and death metal act TERRORIZER.

Fresh off a string of international tour runs, TERRORIZER is back in the studio recording its fourth studio album — their first release since 2012's "Hordes Of Zombies".

With the recognition of their first release, TERRORIZER caught the attention of influential extreme metal bands, and Sandoval joined the band MORBID ANGEL, while guitarist Jesse Pintado joined NAPALM DEATH. TERRORIZER was on a short hiatus, even though both members continued to perform songs from the album during some of their shows.

Fans remained hopeful for the band to create new music and return. Then in 2005, Sandoval and Pintado reformed TERRORIZER with a new lineup to release their second studio album, "Darker Days Ahead" (2006). With Anthony Rezhawk on vocals and MORBID ANGEL's Tony Norman on second guitar and bass, TERRORIZER was back again with new music. But in August 2006, during the week of the album's release, Pintado died suddenly from complications arising from liver failure.

In 2012, Sandoval returned to TERRORIZER with Rezhawk, David Vincent on bass and Katrina Culture on guitar to release the solid yet steadfast "Hordes Of Zombies". Eventually, MONSTROSITY's founder Lee Harrison replaced Culture on guitar and MONSTROSITY/INFERNEAON guitarist Sam Molina joined the band on bass and vocals. Now, under this current lineup of Sandoval (drums),Harrison (guitar),and Molina (vocals, bass),the stage has been set for TERRORIZER to deliver another grindcore classic.