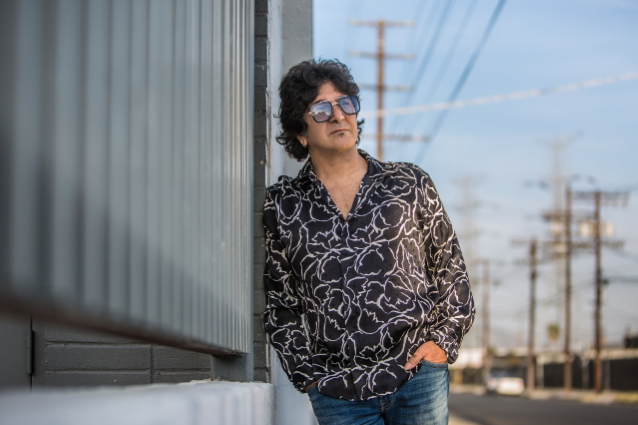 TERRY ILOUS Has 'No Regrets' About His Time With GREAT WHITE

Terry Ilous says that he has "no regrets" about his time as the frontman of GREAT WHITE.

Ilous discussed his exit from GREAT WHITE during a recent interview with Big Music Geek. He said: "GREAT WHITE was such a great opportunity for me. I'm very grateful for the fact that they called me and asked me to join the band. It was all very positive and I don't have any regrets at all. It was a great thing and I thank the band for the opportunity.

"I was with them for nine years and five hundred and sixty shows, most of which were sold out," he continued. "I did very well with those three albums, but they wanted something else, and I also wanted to do something else. They were looking for a different sound or different look, as they say. Whatever. They are happy, and I'm happy, and that's all that matters. I have no hard feelings whatsoever. Things happen. It happens to a lot of great singers. Lots of great musicians lose their gig, but you just cannot dwell on the past. You have to move forward and just say, 'All right, what's it for me now? What do I have to do to continue working?'. I'd realized that I had a good name, so I decided to go back to what I've been doing before, which was voice-over work. I went back to voice-over, doing jingles and then releasing songs. And I'm a happy guy. I have no regrets.

"I wish the band the very best," Terry added. "No hard feelings. I moved on. I mean, honestly, I moved on. I don't know what they're up to. I have no idea. I don't wish anything bad to the band or any members of the band. For me, it was a really great experience. Thank you so much for the opportunity. I am flattered and honored. That's all I can say."

Last November, GREAT WHITE guitarist Mark Kendall confirmed that Ilous was fired from the band via e-mail. Kendall went on to say that Ilous initially found out online that he no longer had a job with GREAT WHITE. "It got released on the Internet before we could tell him," Mark said. "It wasn't our publicist's fault. She released this information. So we hadn't told him yet, and she didn't know that. So he heard the information, and he's going, 'This is a hell of a way to tell [somebody he is out of the band].' And we were just [made out to look like] the bad guys all the way around. And so what do we do now? Go, 'Meet us somewhere, and we'll talk about it.' It was, like, 'He already knows.' So that was a tough situation. We're not bad people. We don't wanna hurt anyone."

In April 2021, Ilous told Waste Some Time With Jason Green that he always made it a point to tell people that his primary focus was GREAT WHITE and not his solo career. "I was doing a lot of interviews, and I always said one thing, I said, 'I am the lead singer of GREAT WHITE. My priority is GREAT WHITE,'" he said. "I always made sure to say that, 'cause sometimes people can misinterpret what you wanna say. So I said, 'No. I am the lead singer of the band GREAT WHITE. My priority is GREAT WHITE. I'll be touring with GREAT WHITE. And if the band is not touring, then I will be doing that on my own. And that's it.' And that is the truth. But apparently someone got upset. I was touring, and eventually one day, I received an e-mail saying, 'Thank for for a great service. You're a great singer. Have a good life.' And that was it."

This past May, GREAT WHITE announced that it had parted ways with Malloy and had replaced him with Andrew Freeman (LAST IN LINE).